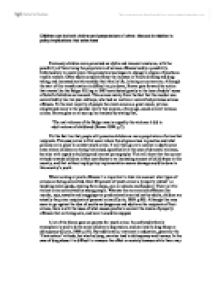 Children can be both victims and perpetrators of crime: discuss in relation to policy implications that arise here.

Children can be both victims and perpetrators of crime: discuss in relation to policy implications that arise here. Previously children were perceived as idyllic and innocent creatures, with the possibility of them being the perpetrators of serious offences hardly a possibility. Unfortunately in recent years this perception has begun to change to stigma of youths as trouble makers. Often adults complain about the increase in Youth drinking and drug taking, and increased activity outside their family life, loitering on corners etc. Although the start of this transformation is difficult to pin down, Brown puts forward the notion that events like the Bulger Killing in 1993 contributed greatly to the loss of adults' sense of belief of children as innocent. This comes mainly from the fact that the murder was committed by two ten year old boys, who had no motive or committed previous serious offences. To the vast majority of people the event came as a great shock, yet also enlightened many to the painful reality that anyone, of any age, could commit heinous crimes. Brown goes on to sum up her analysis by stating that, 'The real violence of the Bulger case is arguably the violence it did to adult notions of childhood (Brown 1998: p.2). Yet the fact lies that people still perceive children as more perpetrators of crime that recipients. This essay aims to first cover where this stigma arises in practice and what policies are in place to combat youth crime. It will then go on to outline in depth some areas where children are being victimised, specifically in the case of domestic violence, but also with regard to bullying and internet p*********y. This will show that the current attitude towards children in fact contributes to an increasing amount of child abuse in this country, and that without rapid policy implementation severe damage could be done to this country's youth. When looking at youth offences it is important to take into account what types of crimes are being committed. ...read more.

Figures showed that in 1995, 32 in 10,000 child required protection from maltreatment (Department of Health, as cited in Pritchard and Kemshall 1999: p.171). This figure is by no means completely accurate, but does demonstrate the extent of the problem. Some data also show very high rates of suicide in children, with over 43% of children in inner city areas having considered suicide and one in six under 11 having attempted suicide, generally due to bullying, abuse, poverty, homelessness, and alcohol abuse (BullyOnline.org, School and Child bullying, 2004). Additionally the affects of domestic abuse are not only short term. Child Abuse is also likely to lead to long-term trauma for victims (Newburn 1993, cited in Williams 1999: p.45). Most cases of child abuse go unseen or unchecked, which means that they remain undisclosed for years to come, meaning once they come out this could lead to even greater distress on the individuals part, especially in the case of p**********c s****l abuse, which will be discussed later. Studies have also indicated how violence against children greatly increases the chance of the abused child showing signs of deviant behaviour in later life. As well a bullying, which leaves mainly children showing symptoms of depression and low esteem, direct observation of children's behaviour at home reveals that abused children display a higher rate of deviant behaviour than non-abused children (Cerezo 1997, as cited in Klein 1998: p.29). Despite all the clear problems and figures that show just how bad child abuse at home as got, incidents are still being treated as special cases, and not actually considered to be crimes. This is especially apparently in s****l abuse cases. 'It is assumed that children are unreliable witnesses; the burden of proof may be placed on 'conflicting' scientific evidence; or where the evidence is gathered from adults, 'false memory syndrome' may be invoked: for the criminal justice system 'deals with evidence and views retraction as evidence of telling lies' (Brown 1998: p.85). ...read more.

India, 30,000 boy prostitutes Sri Lanka, a 100,000 in the Philippines and another 100,000 in Taiwan (UNESCO, Journalists perspective on Asian problem, 1999). In the EU and US legislation has been put forward to clamp down on people subscribing to paedophilia sites. In October 1998 President Clinton signed into law the Child Online Protection Act which criminalizes the commercial distribution of material on web sites which is considered harmful to minors. Additionally, in May 1998 the European Union Council of Ministers adopted a four-year action plan for promoting safe use of the Internet. This will provide funds for a European network of hot-lines and numerous projects on filtering, rating and demonstration products designed to reduce the dangers of the Internet, in particular for the protection of minors (UNESCO, Freedom of information...and p*********y on the internet, 1998). Whereas this may combat the issue of stopping the buyers, stopping the treatment of minors in foreign countries will require a huge international effort, but evidence of British policy success in stopping child abuse for p*********y is already becoming evident (Guardian.co.uk, Web Paedophilia 'Clampdown' saves 100 children, 2004). In conclusion, this essay hopes to have illustrated that while youths are the main perpetrators of some specific incidences of offences, the social stigma as them being trouble makers is not entire fair. That juvenile offences go far deeper than mere trouble making, with some problems arises from more fundamental issues such as social deprivation and domestic abuse. It also aims to have shown a significant area of child victimization, and how this could be combated. While issues like indirect victims have not been documented; children witnessing wife beating, or even police officers compiling child p*********y were not mentioned, as well as the idea of child as both perpetrators AND victims, with instances where parents have beaten their children for getting in trouble with police (Drakeford & Haines, 1998: p.20), it is clear that child abuse is a wide stretching problem which carries over into every facet of social life. ...read more.