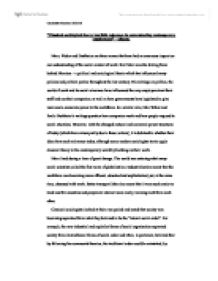 "Classical sociological theory has little relevance in understanding contemporary employment" - discuss. Marx, Weber and Durkheim are three names that have had an enormous impact on our understanding of the social context of work. Karl Marx was the driving force behind Marxism - a political and sociological thesis which has influenced many policies and political parties throughout the last century. His writings on politics, the world of work and its social relevance have influenced the way employers treat their staff and run their companies, as well as how governments have legislated to give more socio-economic power to the workforce. In a similar vein, Max Weber and Emile Durkheim's writings question how companies work and how people respond to social situations. However, with the changed cultural and economic power structures of today (which have arisen partly due to these writers), it is debateable whether their ideas have such relevance today, although some modern sociologists try to apply classical theory to the contemporary world by building on their work. Marx lived during a time of great change. The world was entering what many social scientists called the first wave of globalisation. Industrialisation meant that the workforce was becoming more affluent, educated and sophisticated, yet, at the same time, obsessed with work. Better transport links also meant that it was much easier to trade and for countries and peoples to interact more easily, learning each from each other. ...read more.

Some authors consider assembly line workers show the greatest sense of alienation, while workers such as physicians, teachers or other professionals experience the least alienation because they are both more involved with their work and have more direct control over it. Emile Durkheim, the French sociologist, wrote about "anomie" in The Division of Labour in Society, (1893), which was the process of deregulation that was occurring in society. The rules on how people should behave with one another were no longer clear cut as in the past, so people were unsure what to expect from each other. Anomie is a state where norms are confused, unclear or not present. Durkheim believed that traditional religions provided the basis for common values which the anomic individual lacks. Nowadays, with the much greater prevalence of conflicting opinions and the freedom of expression (often encouraged by political correctness), people are less likely to conform and obey rules and regulations. With no clear or common goal, it is hard for people to work and live in harmony. If a company or society lacks a cohesive identity, there is likely to be anomie as no one knows in which direction the organisation is heading or what to expect from one another. Another Durkheim idea was that of division of labour. Its primary aim was to increase efficiency and output by giving specialised tasks to clearly defined sections of the workforce. ...read more.

This has meant that there are fewer mundane jobs which lead to division of labour, alienation and anomie. While their underlying principles are still applicable to certain jobs, it is likely that their ideas are not applicable to nearly as many jobs today, whilst modern managers try very hard to keep the workforce motivated and involved. Contemporary supporters of Marx argue that his analysis of social class and commodities is still useful as his critique of capitalism can be applied to the current global situation and that alienation is still a problem. However, employers have recognised that it is necessary for employees to work as a team to achieve specific goals and that there is a need for a sense of ownership of the project they work on. So, more and more companies are making a conscious effort to reduce alienation. Anomie, however, is still perhaps present, because companies give their employees more autonomy over the job they do and how they do it. This means there are fewer rules and regulations which may lead to uncertainty about how a particular task should be carried out. In conclusion, classical sociological theory still helps us to understand how best to deal with complex employment situations and how to re-order society to give the workforce more status and involvement. It must be noted, however, that there are limitations to the theories because of the way the workplace has changed since Marx and Durkheim's time. Their theories can be used as a basis for analysis, but not as definitive guides to understanding contemporary employment. ...read more.