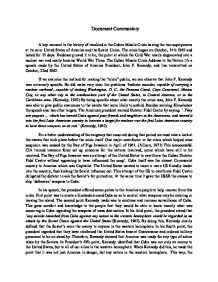 Commentary. The Cuban Missile Crisis Address to the Nation is a speech made by the United States of America President, John F. Kennedy, and live transmitted on October, 22nd 1962.

Document Commentary A key moment in the history of mankind is the Cuban Missile Crisis having the two superpowers at its core: United States of America and the Soviet Union. The crisis began on October, 14th 1962 and lasted for 13 days. Evidence proved it to be, the point at which the Cold War nearly degenerated into a nuclear war and nearly became World War Three. The Cuban Missile Crisis Address to the Nation it's a speech made by the United States of America President, John F. Kennedy, and live transmitted on October, 22nd 1962. If we examine the method for making the "crisis" public, we can observe that John F. Kennedy was extremely specific. He did make very clear the problems 'ballistic missiles, capable of carrying a nuclear warhead...capable of striking Washington, D. C., the Panama Canal, Cape Canaveral, Mexico City, or any other city in the southeastern part of the United States, in Central America, or in the Caribbean area.'(Kennedy, 1962) By being specific about what exactly the crisis was, John F. Kennedy was able to give public awareness to the events that were likely to unfold. ...read more.

At the same time it gave the USSR the excuse to ship 'defensive' weapons to Cuba. In his speech, the president offered seven points to the American people to help recover from this crisis. First point was to create a blockade around Cuba so as to control what weapons may be entering or leaving the island. The second point Kennedy made was to continue and increase surveillance of Cuba. This gave comfort and knowledge to the people that they would be able to know exactly what was occurring in Cuba regarding the weapons of mass destruction. In his third point, the president stated that 'any missile launched from Cuba against any nation in the western hemisphere would be regarded as an attack by the Soviet Union against the United States'(Kennedy, 1962). By doing this, Kennedy clearly defined that the Soviet's were the enemy to anyone in the western hemisphere. In his fourth point, the president regarded that they have reinforced the United States base at Guantanamo and ordered military personnel to be on stand-by. Therefore, Kennedy showed that America was ready for any type of action taken by the Soviets. ...read more.

This was Kennedy's attempt to make public the effort on his part to get the Soviet Union to peacefully end this crisis. At the end of his address to the nation, the president made public the US 'ideals' which were being threatened by the Soviet's. 'Our goal is not the victory of might, but the vindication of right, not peace at the expense of freedom, but both peace and freedom, here in this hemisphere, and, we hope, around the world. God willing, that goal will be achieved' (Kennedy, 1962). The crisis ended with the US withdrawing the WMD from Turkey and USSR form Cuba (US intended to remove them, before the crisis occurred). Although it did not ended in a catastrophically manner, the tensions still remained and the Cold War ended in 1991. To sum up, the speech had a significant impact upon people at the time. Not only it informed the citizens of the United States about the imminent danger that was threatening them, but it was also an open call made upon the soviets to stop their 'offensive'. It also made clear for the nation and even for the captive people of Cuba, the position the United States was going to adopt and the plans made in order to prevent the tripping of World War Three. ...read more.