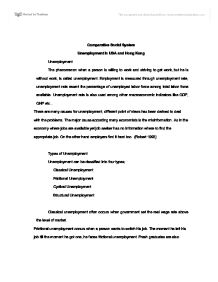 UI system is just to support the unemployed for short term, in the long run an unemployed can go to social security plan however. It can be said in US there is not any king of unemployment benefit it is just short term benefit. But in the current conditions it would be very hard for the workers to sustain in long run due to the non-availability of jobs. The help unemployed worker get under UI system is related to their past earning capacities. (Robert 1993) Social Security Act, is the other way to get help in the long run but again there must be large numbers of unemployed workers and sort of economical crisis in the country to extend the duration of social security help. It has been observed that the people surviving under UI and Social Security Plans are forced to join substandard jobs at time. (Christopher Ruhm 2000) These are the two programs to support unemployed worker and to maintain the standard of living which ultimately in turn to smooth economic operations. (Historical Comparability 2006) Unemployment in Hong Kong As we know the world is facing recession. Almost every sector of each economy is facing a worse slum. Companies are intended to cut their cost to better respond and to survive from the recession. In doing so they are firing employees which are not more needed. This in turn creates much problem both economically and socially. In this context along with all economies Hong Kong is also facing increase in unemployment ratio. ...read more.

But it has been seen that they are being exploited in USA, this is a clear contradiction even government is trying to help those people out. What are the other forces which make workers to be exploited? There are many contradictions in theory and practical. (Esping-Andersen 1999, p.) That is why we are not been able to solve the problems generally prevailing in the society, even after the decades of discussion to find the one best theory. Both USA and Hong Kong tried to come up with the eternal solutions for their people but yet to eliminate poverty, unemployment, class system. We are living in the era of social dualism, people pretend to be interested in others problem but they actually are not. Andersen's model can not be implemented to get the desired results. Globalization and Unemployment Globalization is a concept of no boundaries. Globalization is topic of immense debate in last decade. Globalization do has its impact on unemployment. Globalization affects more on structural unemployment. Due to globalization companies open themselves to different places even across the border for cost cutting and hence caused structural unemployment. This is how globalization impact through the recession period (Robert 1993). Many multinational companies already moved their production units from USA to India and china. Hong Kong and USA both are facing unemployment problems as like almost every country now s day. Growth rates are almost zero and even negative in some economies and it is not possible to predict the future time frame for recovery. Government across the world should collaborate to come up with the solution. ...read more.