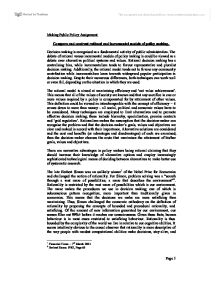 Compare and contrast rational and incremental models of policy making.

Making Public Policy Assignment Compare and contrast rational and incremental models of policy making. Decision making is recognised as a fundamental activity of public administration. The debate of rational versus incremental models of policy making is could be viewed as a debate over alternative political systems and values. Rational decision making has a centralising bias, while incrementalism tends to favour representative and pluralist decision making. Additionally, the rational model tends not to favour any community contribution while incrementalism leans towards widespread popular participation in decision making. Despite their numerous differences, both techniques can work well or even fail, depending on the situation in which they are used. The rational model is aimed at maximising efficiency and 'net value achievement'. This means that all of the values of society are known and that any sacrifice in one or more values required by a policy is compensated for by attainment of other values. This definition could be viewed as interchangeable with the concept of efficiency - it comes down to more than money - all social, political and economic values have to be considered. Many techniques are employed to limit alternatives and to promote effective decision making; these include hierarchy, specialisation, premise controls and 'grid regulation'. ...read more.

Here stages of the policy process follow on from one another but the policy process does not terminate. Solutions define the context for the next problem; hence, the stages of policy process can be seen as a cycle.6 The incremental approach was originally proposed by the economist Lindloom and attempts to correct the imperfections of the rational model and to illustrate how policy decision-makers actually behave. He touts the advantages of a 'successive limited comparison mode over "the rational comprehensive method"'7. This perspective accepts that political objectives may be purposely kept unclear with the intention of building political consensus and support. He argued that decision makers do not annually review all existing and proposed policies, highlight societal goals and research costs, as suggested by the rational model as impractical. Instead they take an incremental approach in which there is slow evolution of policies by cautious incremental changes. The incremental approach is conservative in that existing policies, programs and expenditure are considered and attention is concentrated on new policies and on increases, decreases or modifications of established programs. Perhaps this suggests that they do not totally remake policy every time they make a 'policy-decision', but in its place modernise existing policy. ...read more.

or constituency; avoiding overly rigid adherence to rules; the oversimplification of reality; the over-quantification at the expense of qualitative factors; and, the reluctance to engage in policy and program evaluation and feedback. This policy model is effective where as the incremental option may not be as in the case of the Falklands. This method of policy making was and is still being used with the Europe issue - the stance being 'wait and see'. Incrementalism is a continuous, exploratory process and the policy makers tend to operate within an existing framework and adjust their position in light of any feedback. The whole issue of the Falklands illustrates the inability of Whitehall to plan any long term policy and make decisions. 1 Financial Times - 7th March 2001 2 Herbert Simon 1982, Page 66 3 Simon 1983 4 Psychology Review 63 - Rational choice and the structure of the environment 5 Making Public Policy - Lecture 7 - taken from Baybrooke and Lindboom (1963) 6 Making Public Policy - Lecture 6 - Rational Models of Policy Making 7 Public Administration Review - 'The Science of Muddling Through' by Charles Lindloom 8 Lindloom 1959 - Page 266 9 Lindloom 1959 - Page 226 10 Landing On Your Feet: How To Control Policy Problems - Chapter 8 11 http://www.uh.edu/~lnielsen/pdf_files/ps6314e1.PDF 12http://www4.gvsu.edu/josephe/gpy309/chapter1/The%2520Science%2520of%2520Muddling%2520Through.pdf Page 1 ...read more.

This essay demonstrates a basic understanding of rational and incremental models of policy making. Some good points are made with regards to advantages and disadvantages but many of the points would be improved by using examples