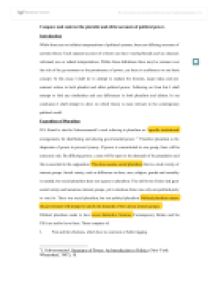 Compare and contrast the pluralist and elitist accounts of political power.

Compare and contrast the pluralist and elitist accounts of political power. Introduction Whilst there are not infinite interpretations of political systems, there are differing accounts of systems theory. Each separate account of a theory can have varying threads such as classical, reformed, neo or radical interpretations. Within these definitions there may be variance over the role of the government or the prominence of power, yet there is confluence on one basic concept. In this essay I shall try to attempt to explain the theories, major ideas and pre-eminent writers in both pluralist and elitist political power. Following on from this I shall attempt to find any similarities and any differences in both pluralism and elitism. In my conclusion I shall attempt to draw on which theory is most relevant in the contemporary political world. Exposition of Pluralism H.S. Kariel is cited in Schwarzmantel's work referring to pluralism as: 'specific institutional arrangements for distributing and sharing governmental power.'1 Therefore pluralism is the dispersion of power to prevent tyranny. If power is concentrated to one group, there will be autocratic rule. By diffusing power, a state will be open to the demands of the population and this is essential to the supposition. This does assume social pluralism; that is a wide variety of interest groups. Social variety, such as difference in class, race, religion, gender and sexuality is needed, but social pluralism does not equate to pluralism. ...read more.

Similarities Pluralist and elite theory does offer parallels. In Dunleavy and O'Leary's 'Theories of the State', overlaps elite theory and pluralism: 'democratic elitism or revisionist democracy'.7 Polyarchy is perhaps a principal notion of this, in that there are various interest groups in society but these are all in some way or another dominated by an elite at the top of the organisation; as Michels asserted 'Who said organisation, said oligarchy.' Organisations then are led by elites but they have to be receptive to the demands of the interest groups. This does I feel reconcile the two theories of pluralism and elitism, even though they are supposedly opposed. This can be explained by a polyarchy of elites, and it is this numerousness of them that means they must adapt policy to adhere to interest groups. Differences Pluralism believes power is dispersed through society, while in direct contrast elitism finds power concentrated in the hands of a minority. Pluralism centres on the notion of interest groups as being particularly important and significant. This assumes a kind of equal playing field, as not one interest group in pluralist theory is supposed to be more important than the other. However elitism identifies politics as taking place in a sphere 'characterised by structured inequalities.'8 Elites have the domination of resources, such as military, economic or political power in order to impose themselves upon the masses. Elitism identifies the masses as being incompetent. ...read more.

Blair even banned Liz Davies, a member of the Grassroots Alliance faction of the Labour party, from standing for election in 1997 at the Leeds North East seat, as she was seen to be too dissenting. This was however counterattacked by the party members, who then voted Ms. Davies onto the N.E.C. What will replace the House of Lords is also questionable. Will Blair promote the circulation of elites by removing the hereditary peers with simply appointed 'Tony's cronies'? Only time will tell. Certainly, although pluralism is desirable, it is unrealistic. It is perhaps overly pessimistic to say we live in an elitist society, but we do not fulfil the 7 features of a pluralist political model. There are free and fair elections, however this can be disputed in the selection of the Labour party selection for the candidate for London mayor as discussed earlier. There are elected officials, but this is only for selection of MPs & MSPs , MEPs and local council officials. The corridors of power like the civil service, the military and the police remain appointed and to a large degree, unaccountable. However as Schwarzmantel does recognise 'political elites have to submit themselves for re-election but the fact is neglected that many other groups which carry the elite distinction do not.'12 Democratic elitism should merge the best parts of pluralism and elitist theory. However we must realise that with the fusion of two systems, the negative elements will also be exposed. ...read more.

This essay has some good ideas but is chaotically organised - ironic, given that it is subheaded, usually an indication of a solid structure! Too many words are devoted to summarising texts, without analysing why this is necessary. As such, I'd give it a 2.2, although with some substantial tweaking to the writing style and structure it would probably garner a far better mark.