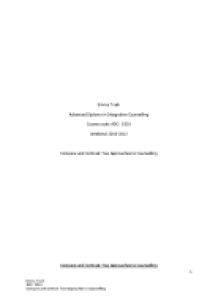 ﻿Emma Trask Advanced Diploma in Integrative Counselling Course code: ADC- G301 Weekend 2010-2012 Compare and Contrast Two Approaches to Counselling Compare and Contrast Two Approaches to Counselling Personality can be defined as a dynamic and organised set of characteristics possessed by a person that uniquely influences his or her cognitions, emotions, motivations, and behaviours in various situations. It refers to the patterns of thoughts, feelings and behaviours consistently exhibited by an individual over time that strongly influence our expectations, self-perceptions, values and attitudes, and predicts our reactions to people, problems and stress. The study of personality therefore has a broad and varied history in psychology, with an abundance of theoretical traditions. Humanistic and Psychoanalytical theory can be seen as two main dispositional perspectives derived through the field of Psychology. Psychoanalytic theory explains human behaviour in terms of the interaction of various components of personality for example the id, ego, and super-ego and believes that personality is based on the dynamic interactions of these three components. In contrast to humanistic psychology it is emphasised that people have free will and that they play an active role in determining how they behave. Accordingly, humanistic theory focuses on subjective experiences of a person as opposed to forced, definitive factors that determine behaviour. With this fundamental difference in mind this essay will therefore compare and contrast psychoanalytical and humanistic traditions in terms of their application to counselling and psychotherapy, looking categorically at the shifts and changes within both traditions and therefore how both are used within today?s society. Psychoanalytic theory was an extremely influential force during the first half of the twentieth century. It focused on understanding of the unconscious motivations that drive behaviour. Psychoanalytic theory originated with the work of Sigmund Freud. Through his clinical work with patients suffering from mental illness (Freud and Breuer 1955 [1893-5]) Freud came to believe that childhood experiences and unconscious desires influenced behaviour. ...read more.

Rowan argues that ?labelling does harm to clients even when the labels are correct?. In other words, one does not even have to validate diagnostic categories in order to argue that they are unhelpful, simply because they block the therapeutic relationship by suggesting that the therapist, rather than the client is the expert on the client?s problems and therefore unable to speak the clients language (Rowen, 1998). Some current therapies therefore employ methods that are not entirely composed of ?client language? for the treatment of problems which were originally part of the traditional province of psychoanalysis. If we take Freud?s ?traumatic neurosis? (porter, 2002) as an example, we find that this has a number of current labels. One of the most common is Post Traumatic stress Disorder (PTSD) and one of the most novel methods of treatment is Eye Movement Desensitisation and Reprocessing (EMDR). PTSD is often diagnosed in soldiers returning from war and EMDR is a treatment specifically developed for those suffering from it. It is a collection of integrated therapy involving concepts derived from psychodynamic therapy and cognitive behavioural therapy (CBT) amongst others. Its distinguished feature is that it requires suffers to learn to focus their thoughts on traumatic topics and then control their eye movements thus a progressive reduction in the experience of trauma ensues. The language used by those who employ concepts such as PTSD and treatments such as EMDR is very different from that used by Freud. An interesting question therefore arises: to what extent are modern day developments different from the type of talking cure offered by Freud and his early followers? One key element remains identical- the client is engaged in the first instance through the use of words. Therapist may employ a different mode of speaking, that is the type of language and the stated aims of the treatment may differ, but in each case, what is sought is the reduction or elimination of the client?s symptoms (Hall et al, 2010). ...read more.

Humanistic therapy therefore offers a style which is rooted in an appreciation of human beings and there innate tendency to heal and grow- a style which fosters the valuing, the individual quirks and foibles, a principled willingness to follow where the client leads and an optimism which is itself conducive to therapeutic success. The finest practitioners in each modality I believe have therefore already incorporated all or much or what they need from other modality. However I believe at times practitioners can be ignorant, perhaps believing that they are staying ?true? to their theoretical background, but none the less, possibly secluding themselves from what is going on elsewhere in the world of counselling and psychotherapy and consequently are not equipped to invent for themselves what is missing or underemphasised in their own training. In conclusion it may not pay to think of psychoanalytical and humanistic as competing schools of thought- but to consider that each branch of theory has contributed to our understanding of the human mind and behaviour. Humanistic theory added yet another dimension that takes a more holistic view of the individual and there are many groups of individual practitioners that working with a combination of some or all modality often including psychodynamic input. This comes to no surprise as although heavily criticised- both Freud?s seduction theory and work relating to traumatic neurosis have heavily influenced all fields of counselling and psychotherapy today. I may even argue that his work is the fundamental basis of theoretical thinking. Although differences still stand with both schools of thought, where humanistic theory gives way to the potential for growth and psychoanalytical theory offers insight into our unconscious thoughts, I feel that when both these elements are brought together, true therapeutic change can take place. Consequently, regardless of the chosen theoretical background, when engage in therapeutic relation, the main focus should be the client and their interest alone. Therefore to avoid labelling and to work within the context of the client I believe working via a humanistic approach which is therefore integrated with other modality can provide a harmonious blend of both presence and theology. ...read more.