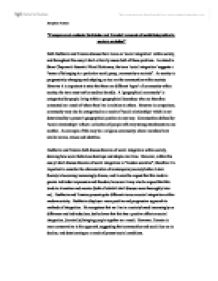 &quot;Compare and evaluate Durkheim and Tonnies' accounts of social integration in modern societies&quot;

"Compare and evaluate Durkheim and Tonnies' accounts of social integration in modern societies" Both Durkheim and Tonnies discuss their views on 'social integration' within society, and throughout this essay I shall critically assess both of these positions. As stated in Steve Chapman's Essential Word Dictionary, the term 'social integration' suggests a "sense of belonging to a particular social group, community or society". As society is progressively changing and adapting, so too are the communities within society. However it is important to state that there are different 'types' of community within society, the term must not be used too broadly. A 'geographical community' is categorised by people living within a geographical boundary, who are therefore connected as a result of where they live in relation to others. However in comparison, community may also be categorised as a result of 'social relationships' which is not determined by a person's geographical position in any way. Communities defined by 'social relationships' reflect a collection of people with very strong attachments to one another. An example of this may be a religious community, where members have similar norms, values and identities. Durkheim and Tonnies both discuss theories of social integration within society, showing how social behaviour develops and adapts over time. ...read more.

Therefore, society is a system of different 'organs', each of which has a different role but each of which is dependent on another 'organ' to ensure that society functions. Durkheim talks of 'division of labour' within society, where by society is divided in to separate groups each of which perform a separate task. However, Durkheim does not just describe division of labour in the work place, for example on a factory floor, but this theory can be applied to many situations. For example in a University it may be argued that there is a 'division of labour' intellectually between pupils and staff. Both perform a different function; however, the pupil depends on the teacher in order to learn, and the teacher depends on the pupil in order to have a job in the first place. Therefore both parties are dependent on each other. As I mentioned previously, Durkheim recognises that we live in a society based increasingly on difference and individualism, but believes that as a result of division of labour, people are interdependent on one another, and therefore social integration is reinforced. Different 'organs', or groups within society rely heavily on each other in order for society to function. ...read more.

Therefore individual actions are heavily influenced by society, and levels of social integration play a very important role in ensuring personal happiness and social cohesion. This is highlighted in Durkheim's classification of 'egoistic suicide', which takes place as a result of excessive individualism, where the ties binding an individual to a social group are so weak, they have no integration with social life. Here, Durkheim is displaying quite a similar view to Tonnies, showing how modern society can produce impersonal relationships, and result in a decline of social integration. In conclusion, both Tonnies and Durkheim present views on social integration within modern society, and they have both shown how social integration has adapted over time. Society has become increasingly diverse, and although this may mean that communities may have suffered as a result, and social integration may have weakened in some respects, it has also given rise to great freedom of expression and freedom of choice. Durkheim has displayed how individualism and solidarism are compatible and can both live along side each other, however he has also shown possible problems that may occour from this social situation. In a large city it would be impossible to say hello to every body as you walked down the street, and although Tonnies may argue that this reflects a decline in social integration, Durkheim may argue that this reflects an interdependent functioning society. ...read more.