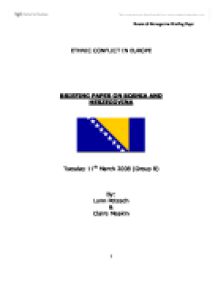 Conflict in Bosnia and Herzegovina

ETHNIC CONFLICT IN EUROPE BRIEFING PAPER ON BOSNIA AND HERZEGOVINA Tuesday 11th March 2008 (Group B) By: Lynn Petesch & Claire Meakin 1. THE CONFLICT PARTIES Who are the main groups involved in the conflict? Bosnian Serbs (B. Serbs), Bosnian Croats (B. Croats) and Bosnian Muslims (B. Muslims). How do they identify themselves and each other? * The B. Croats and B. Serbs identify themselves with their home nations, and the Muslims identify themselves by their religion. All three ethnic groups were given the chance to vote in 1990 as Bosnians, but all chose to vote for their respective ethnic groups. (Friedman 2004: 35) * Historically, both Serbs and Croats have claimed the Muslims as belonging to their own nations because the Serb/Croat nation existed as a nation long before the arrival of the Ottomans in the fifteenth century. The inhabitants of medieval Bosnia-Herzegovina (BiH) were either Serbs or Croats. (Carter and Norris 1996: 51). * It was only in 1969 that the B. Muslims were recognized as a separate ethnic group and have been permitted to practice their religion freely (Friedman 2004: 25) * B. Serbs/B. Croats see that half a millennium of Muslim identity is not considered sufficient to create a Muslim nation. (ibid 52) How exclusive are these identities? BiH was historically multiethnic and relatively tolerant, as its figures for intermarriage, particularly in the urban areas, demonstrate1. However, when communism collapsed, nationalism and regionalism were finally allowed expression (Friedman 2004: 41). It is important to mention here that there were sporadic outbursts of violence (i.e genocide in World War II) but ethnic identities only became of central importance following the breakdown of Yugoslavia, and today these are still highly exclusive. ...read more.

Throughout the conflict the B. Muslims wanted to see a unified BiH in fear of being reduced to an enclave. - Bosnian Serbs: When the B. Serbs realized that their claims for a union with Yugoslavia were unrealistic, they still argued for a loose confederation which they thought would allow the Serb-dominated parts of Bosnia to eventually merge with Serbia. (Burg & Shoup 1999: 104) The main demands of the B. Serbs during the civil war were a partition of BiH and an exchange of population, which would ensure them ethnic domination and reduce the Muslim-held parts to an enclave (ibid: 172) - Bosnian Croats: B. Croats were divided: While the Herzegovinian Croats preferred autonomy and unity with Croatia and hence were opposed to the Bosnian government, the Croats from central Bosnia and Sarajevo were in support of the Bosnian government and favoured a good relationship between the Muslims and Croats. (ibid: 197,198) With what means do they pursue the conflict? -Regular forces: * The Bosnian army (ARBiH, which was only officially organized by May 1992) * The Bosnian Croat army (HVO) * The Bosnian Serb army (VRS- supported by the Serbian state and made up of remnants from JNA) -Irregular forces: * Around 83 other paramilitary units fought the war. (Friedman 2004: 44) * Serbian irregular forces were often backed by the Yugoslav Army (JNA). * The most prominent and cruel paramilitary unit from the B. Serb side were Arkan's Tigers and the White Eagles led by the extreme nationalism Vojislav �e�elj * Before the existence of the ARBiH, Sarajevo was defended by a group of two criminals called Caco and Celo and different Patriotic Leagues protected areas such as Bihac and Tizla. ...read more.

and some UN agencies: the World Bank and the International Monetary fund (IMF). These institutions are all strongly backed by the United States and other major Western powers. (Bose 2002: 3). -Shortly after the DPA, the NATO-led `Implementation Force� (IFOR) was sent into BiH to keep peace, separate the armed forces and delineate and transfer territory between the entities. IFOR was replaced by the NATO-led `Stabilization Force� (SFOR) responsible for contributing to a secure environment. (Morton, Nation, Forage, Bianchini 2004: 191) -Today it is the European Union led, EUFOR Althea, who are responsible for overseeing the continuation of the DPA implementation. -The Peace Implementation Council (PIC) was instituted to oversee the peace process and the Office of the High Representative (OHR) was created to help implement peace from above. (ibid: 192 and 194) -During the civil war, the international community largely appeared powerless. -The Contact Group members played a key role in conflict management of the war in BiH, but the US was most central, nevertheless it was hugely criticised. -The most fundamental explanation of the lack of interest of U.S. in the early stages of the war was the view held by key policymakers that the fighting did not threaten U.S. national interests as the Balkans was of little economic or political importance to them. -However, the U.S. were largely involved in efforts at unifying B. Muslims and the B. Croats against the B. Serbs, which eventually led to the end of the conflict. DISCUSSION TOPICS: 1. How far can the security dilemma be attributed to the cause of the ethnic conflict in BiH? 2. Discuss the role of Milo�evic with regard to the breakdown and rebuilding of BiH? 3. Could the international community have acted sooner? To what extent did the international community fail? 4. ...read more.