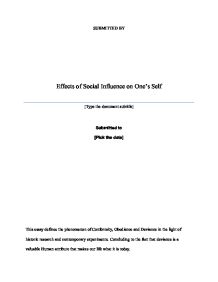 Conformity and Obedience. This essay defines the phenomenon of Conformity, Obedience and Deviance in the light of historic research and contemporary experiments. Concluding to the fact that deviance is a valuable Human attribute that makes our life what i

SUBMITTED BY Effects of Social Influence on One's Self [Type the document subtitle] Submitted to [Pick the date] This essay defines the phenomenon of Conformity, Obedience and Deviance in the light of historic research and contemporary experiments. Concluding to the fact that deviance is a valuable Human attribute that makes our life what it is today. Introduction: Man is a social animal and among his other social needs, is to be socially recognized and acclaimed by his fellow society members. This desire is so overwhelming that one might go to any extent to be part of a social group. Thus one's opinions, expressions and behavior might change in order to obtain coherence with the group norm. The desire to be part of a group can be so daunting that one may base their major decisions on this desire of others. In fact we tend to provide justifications of our own actions by comparing them with other and thus getting our validation. The behavior/ decision seem more reasonable to us if we find others doing it too. Since our childhood we have been taught about the behavior which are acceptable by the society, this tends to decide what is right or wrong for us. The two most visible attitudes discovered by extensive research, are conformity and obedience. Two might appear to be one and the same. ...read more.

The experiment was repeated with eighteen different bars. Now originally, the subject was one individual who was made to sit consistently in the same spot throughout the experiment whereas those around him were made to change their seats time and again. Also, they were instructed by Asch to give wrong answers on 12 of their 18 trials. The participants were made to give answers aloud and what came out of results was surprising. 37 out of 50 subjects gave conformity to the majority at least once. It was concluded out of his experiment, that individuals may fall for informative (where individual doesn't have sufficient information) as well as normative social pressure (where individual wants to be liked) if the situation is vague and may conform to groupthink. The figures 2 and 3 in Appendix shows actual results of those experiments. 3) Milgrim's Experiment: Milgrim's experiment was devised to analyze the degree of obedience one can show to higher authorities. 40 men were recruited for this purpose and the research was conducted by University of Yale. During the experiment, two participants were given a role of teacher and a learner. They were kept in separate chambers where they could communicate but couldn't see each other. The teacher was instructed by experimenter to ask questions from the learner and was asked to give an electric shock through shock generator if given with a wrong answer. ...read more.

friends and family. Therefore, if there is a norm in one's social group and one's close friends have a perception different than that, then there is a higher possibility that individual may exhibit behavior in consistence with his close circle which can be deviant to that of a group norm. In the last, deviance from group norm can also act as a constructive force for the society and may provoke many revolutionary changes in it. Conclusion: Social influence is a powerful force. While level of conformity to a certain group may vary in individuals but obedience to a legitimate authority is important to live stable and civilized life. It is historically proven that both conformity and obedience influence one's decision making and behavior patterns exhibited in a particular social setting. While deviance can be seen as a crime when one is not obedient to a legitimate authority in a society, but we have seen that disobedience to legitimate or illegitimate authorities have brought about astonishing changes in the world forced by an individual and a follower group. As we know that every revolution is considered a conspiracy until victory. Deviance from conformity is seen every day in our lives, when one refuses to follow the norms of a group and creates or follows his own path whether they are successful or a failure depends on the motives of that individual. The group may then conform to that particular path and change their collective behavior. Deviance from norms proves us as Human Beings; always evolving, questioning authority and traditions. ...read more.