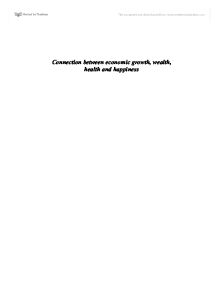 Connection between economic growth, wealth, health and happiness Contents 1. Introduction 3 2. What is an economy? 4 2.1 The UK economy 4 2.2 Economic Globalisation 4 3. Economic Growth & Measurement 5 3.1 Growth and Environmental Gains 5 3.2 Environmental Losses and Repair 5 4. National Well-being, Health and Happiness 6 4.1 Alternative Measurements 7 5. Conclusion 7 6. References 8 Connection between economic growth, wealth, health and happiness 1. Introduction Economies around the world are varied and the wealth of the country is portrayed by its economic growth. Countries with high economic growth are generally referred to as developed countries and those with lesser growth are considered to be developing countries. Research has been conducted by sociologists, economists and psychologists to determine the link between economic growth and happiness. Whilst it is agreed that economic growth brings wealth to the country, this report will investigate whether economic growth can bring health and happiness also. 2. What is an economy? An economy is a system to control the income, assets, resources and wealth of a country. The production, consumption, distribution, imports and exports of goods are all part of an economy of a country. The economy is organised in such a way that it controls the prices and consumption of goods in a western society like the UK. By controlling how much is consumed and what prices are paid, the demand and supply of goods can be controlled. ...read more.

GDP is a measurement of income per person. Between 1992 and 2003, the UK saw a large increase in both inward and outward FDI showing: * Increased foreign assets for UK firms/households * Outsourced manufacturing services * Banking, IT, insurance services and consultancy growth * Better competition in global market By 2008 when the recession hit, the UK had become better off than 20 years earlier according to GDP figures. Table 1 shows the UK ranked 7th out of the group of 7 major developed countries in 1997 - however in 2005, UK was ranked 3rd (Fribbance, 2009, p.24-26) with a GDP of $32,860 (US), a rise of 47%. 3.1 Growth & Environmental gains Economic growth and rising GDP are perceived signs of: * Well performing governments * Improvement in standards of living - "UK better off" * Increases investment in technology * Energy Efficiencies 3.2 Environmental Losses and Repair The negative impacts of growth and GDP rise are seen as: * Increase in consumption leading to increased waste - cheap clothing/electrics * Pollution increase from production overseas and transportation to western countries * Domestic energy consumption increase - central heating, electrical goods The UK is becoming a weightless economy - by importing good from countries like China, Co2 emissions in the UK are reduced but may be higher in China due to increased production in factories without the technology or money to reduce unnecessary pollution (Fribbance, 2009, p.104). ...read more.

Bhutan is a country where happiness is paramount, but to achieve this, they have banned: o Advertising o Plastic bags o Cigarettes o Consumerism - no imports Whilst it could be argued that there is no freedom or choice and lessened economic growth, the monarchy believe spirituality and happiness is far more important ("Economic wealth and happiness", 2009, track 2). 4.1 Alternative Measurements Several indicators are considered better measures of well-being: * Gross National Income (GNI) measures income per head, rather than average per head. * Human Development Index (HDI) measures life expectancy, literacy and education enrolment with GDP - UK ranks 108th globally (table 3, Fribbance, 2009, p.39). * Happy Planet Index (HPI) measures environmental damage, satisfaction, life expectancy - Vanuatu tops the table (Fribbance, 2009, p42-43). 5. Conclusion Economic growth and rising GDP does not bring well-being and health to a nation. People in the UK are earning more than ever, however are not happier regardless of the ability to consume. There are more illnesses prevalent in today's high earning society than 40 years ago when income was up to 3 times less. GDP alone cannot measure the well-being of a nation; indicators need to measure inequalities also. In a bid to increase economy, pollution has been exported overseas resulting in increasing levels of Co2 emissions by developing countries, leading to greenhouse gases and climate change. The UK like other developed countries has an issue of inequality which needs to be addressed for national happiness to be achieved. Word count 1373 6. ...read more.