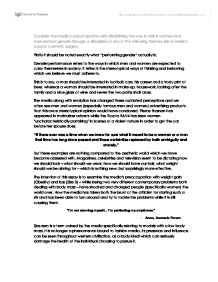 Consider the medias preoccupation with disciplining the way in which women and men perform gender through a discussion of any of the following themes: size 0; obesity; 6-pack; cosmetic surgery.

Consider the media's preoccupation with disciplining the way in which women and men perform gender through a discussion of any of the following themes: size 0; obesity; 6-pack; cosmetic surgery. Firstly it should be noted exactly what "performing gender" actually is. Gender performance refers to the ways in which men and women are expected to carry themselves in society. It reflects the stereotypical ways of thinking and behaving which we believe we must adhere to. This is to say, a man should be interested in football, cars, his career and a frosty pint of beer, whereas a woman should be interested in make-up, housework, looking after the family and a nice glass of wine and never the two paths shall cross. The media along with evolution has changed these outdated perceptions and we often see men and women (especially famous men and women) advertising products that this once stereotypical opinion would have condoned. Pierce Brosnan has appeared in moisturizer adverts while the Toyota RAV4 has seen women 'uncharacteristically partaking' in scenes of a violent nature in order to get the car before her spouse does. "If there ever was a time when we knew for sure what it meant to be a woman or a man that time has long since passed and those certainties replaced by both ambiguity and anxiety." But these examples are nothing compared to the aesthetic world which we have become obsessed with. ...read more.

The weight desirable to illustrate what the designer wanted to create is therefore enhanced when it is worn by a woman with a similar frame. In today's society however, the truth is that many men find women with a size zero frame as 'too skinny' and often 'sickly' to look like. The 'World Health Organization' classifies of body mass index of 18.5 as being the lowest 'normal' score. After the death of Luisel Ramos at a fashion show, New York, Madrid and Milan (three of the biggest fashion capitals) banned girls with a BMI lower than 18.5 from parading the latest trends on the runway3. On looking back in history, it is evident that weight is an attribute which fluctuates between what size is most desirable at any one point. In centuries past voluptuous women boasting a waistline of 16 inches plus were seen as being the more dominant, self-asserted, attractive size. Now however, the parallels have shifted and most men would rather be accompanied by the skinny (often unhealthy looking) women who grab the media attention of today. "Children who use a lot of media have a lower activity level which is linked to a higher rate of obesity" - Vandewater, 2004 In the case of obesity, media's detrimental effects on children are twofold. Both influencing children in what sort of food they should be eating (McDonalds, Burger King, Pizza Hut) and by providing a source of entertainment which further separates them from the world of exercise (videogame culture, YouTube, etc). ...read more.

If someone wants to lose weight, along with will power, they often need the support of their peers. While if someone believes they need to lose weight in order to gain popularity or make themselves feel better, it is often their pals who provide them with positive feelings by commenting on how great they look as they are, etc. Parents play a major role in children's lives. If they reinforce the attitude of not judging other people by their weight, skin color, clothing style etc, and can respect other for who they are, they can empower their kids to have a better opinion of themselves and to take what they hear via the media 'with a pinch of salt'. The media does nothing more than fuel our desire to look like other humans who have 'better' attributes than us. Media cannot be blamed for causing eating disorders enabling us to 'achieve a size zero' nor can they be put to blame when we decide that going under the knife in a 'nip-tuck' procedure was not right for us. We often fall into the trap of aiming to attain, unattainable assets, whether this is a career or a waist size. Unfortunately the media is the helping hand, the devil on our shoulders giving us that extra push, inspiring us to take the chance. I mean, we only live once, it'll tell us. Whatever happens from there on in is our own fault, because when we look back with retrospect, we had the choice, and we made the choice, not the voice on the screen, the voice in our minds. ...read more.