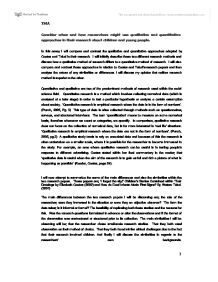 Consider when and how researchers might use qualitative and quantitative approaches in their research about children and young people. In this essay I will compare and contrast the qualitative and quantitative approaches adopted by Coates and Takei in their research. I will initially describe these two different research methods and discuss how a qualitative method of research differs to a quantitative method of research. I will also compare and contrast these approaches in relation to Coates and Takei's research papers and then analyse the nature of any similarities or differences. I will discuss my opinion that neither research method is superior to the other. Quantitative and qualitative are two of the predominant methods of research used within the social science field. Quantitative research is a method which involves collecting numerical data (which is analysed at a later stage) in order to test a particular hypothesis or analyse a certain assumption about society. 'Quantitative research is empirical research where the data is in the form of numbers'. (Punch, 2005, Pg. 3) This type of data is often collected through methods such as questionnaires, surveys, and structured interviews. The term 'quantification' means to measure on some numerical basis, therefore whenever we count or categorise, we quantify. ...read more.

The theory of this study could be copied, but in reality it would be much harder to replicate than the more organised methods involved in Takei's quantitative research. Another difference between Takei's quantitative research and Coates' qualitative research is that in Takei's case he formulated his hypothesis (research question) before the research took place and this remained unchanged throughout his research. In comparison, although Coates also had a hypothesis at the start of her research she refined it at the final stage of her research and even suggested new possible research questions. Even though Takei and Coates both used the same method (observation), the ways in which they structured their observations is evidence of the differences between Coates qualitative and Takei's quantitative approach to research. Takei's study took place in the homes of the children he was observing where he took the role of objective observer and not by immerse himself in the environment or influence what was being studied. His method involved video-taping the observations in order to analyse the findings at a later point. In contrast Coates' chosen method of observation was to become immersed within the classroom environment, with the hope that by participating in the observations she would be able to get a better understanding of the links between the children's language and drawing while she sat observing and make anecdotal notes of the language used by the children (between the ages of 3 and 7) ...read more.

In conclusion, after examining the similarities and the differences between the quantitative and qualitative approaches to research taken by Takei and Cotes it is my opinion that both types of research are valid in their own right, and that neither approach is superior to the other. Quantitative and qualitative are both valuable methods of research and I feel that the main difference between the two is in the way the researcher has decided to record and then present their findings, this is either as numerical data as in Takei's quantitative research or as written data as in Coates qualitative research. A research approach should be chosen by taking into account which is the most appropriate method in terms of the area to be studied, therefore in other words the research method should be determined by what the researcher is trying to find out. (Punch, 2005, p.5) It also needs to be acknowledged that both sets of research, quantitative and qualitative can actually work together in alliance and it is possible that this alliance may result in forming a stronger set of results. I am now of the understanding that there is no 'right' way to conduct social research and that both approaches have their strengths and their weaknesses, because of this view I feel it would be a mistake for social scientists to become reliant on only one of these research methods. ...read more.