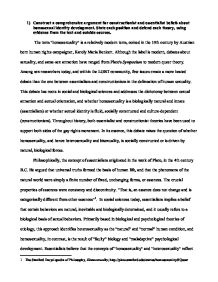 Construct a comprehensive argument for constructionist and essentialist beliefs about homosexual identity development. State each position and defend each theory,

1) Construct a comprehensive argument for constructionist and essentialist beliefs about homosexual identity development. State each position and defend each theory, using evidence from the text and outside sources. The term "homosexuality" is a relatively modern term, coined in the 19th century by Austrian born human rights campaigner, Karoly Maria Benkert. Although the label is modern, debates about sexuality, and same-sex attraction have ranged from Plato's Symposium to modern queer theory. Among sex researchers today, and within the LGBT community, few issues create a more heated debate than the one between essentialism and constructionism in the delineation of human sexuality. This debate has roots in social and biological sciences and addresses the dichotomy between sexual attraction and sexual orientation, and whether homosexuality is a biologically natural and innate (essentialism) or whether sexual identity is fluid, socially constructed and culture-dependent (constructionism). Throughout history, both essentialist and constructionist theories have been used to support both sides of the gay rights movement. In its essence, this debate raises the question of whether homosexuality, and hence heterosexuality and bisexuality, is socially constructed or is driven by natural, biological forces. ...read more.

He invented a new terminology that would refer to the nature of the individual and not to the acts performed."3 Essentialism is often considered to be a conservative position in regard to sexual identity and considered to be "reactionary" in their consequences.4 Ulrich's, and similar theories were adopted by the homophile movement to attempt to gain rights under the pretense that because homosexuality was a biological disposition, than it should not be persecuted or treated any different than other mental and physical "abnormalities". In their efforts to fight homophobia essentialists typically try to promote gay rights through arguing that gay people "can't help" being gay. By admitting that homosexuality was an "abnormality", and by appealing to science, this theory became the basis for many groups in the homophile movement, including the Daughters of Bilitis and the Mattachine Society, who appealed for civil rights for gay people through assimilation rather than confrontation. Essentialists assume that no sexual orientation, whether same-gender, bisexual, or heterosexual, is a conscious choice. ...read more.