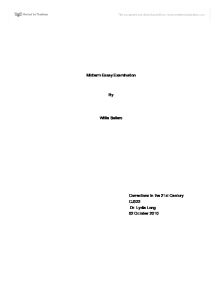 Corrections in the 21st Century - 3 Strikes, Boot Camps and Female Prison Officers in the US Correctional System.

Midterm Essay Examination By Willie Sellers Corrections in the 21st Century CJ322 Dr. Lydia Long 02 October 2010 Midterm Essay 1. What consequences do three-strikes laws have for the criminal justice system and for the corrections subsystem? Many states have adopted sentence enhancements, usually the mandating of longer prison terms for violent offenders with records of serious crimes. Mandatory sentence enhancements aim to deter known and potentially violent offenders and to incapacitate persistent criminals through long-term incarceration.30 these sentence enhancements have come to be known as three-strike laws. Felony convictions must serve a minimum of 25 years. The law also doubles prison terms for offenders convicted of a second violent felony. (Schmalleger, Frank) Problems with the three strikes law is the price of overcrowded prisons. Minor crimes, such as petty theft and burglary received 25 year long sentences. Another flaw with the three-strikes-law is it takes away the power from judges. ...read more.

Second, while military drill and ceremony and a daily schedule of hard labor and physical training were common to most boot camps and appealed to the general public, there was no conceptual model guiding implementation. Observers soon discovered that rigorous physical activity only produced physically fit offenders and did little to reduce short- and long-term recidivism, prison populations, and operating costs Third, there was no agreement on the role of treatment or aftercare. Some boot camp programs included them; most did not. Researchers showed that without treatment and aftercare, the benefits of boot camp were short-lived. (Schmalleger, Frank.) 3. What is the best solution for jail overcrowding? Some solutions for jail overcrowding are front-end, trap-door, side-door, and back-end strategies; Intermediate sanctions, sometimes referred to as front-end programs or strategies. Front-end programs are options for initial sentences that are more restrictive than traditional probation but less restrictive than jail or prison. ...read more.

As one author explains it, "On the one hand, to be female is to be different, an outsider. On the other hand, female guards have much in common with and are sympathetic to their male peers as a result of their shared job experience." (Schmalleger, Frank.) Resistance by inmates, for female correctional officers was not as prevalent as staff resistance. Male inmates' initial objections to having women in maximum security housing units usually focused on privacy, although some simply objected to women giving them orders. (http://nicic.gov/pubs/1991/009504.pdf) More challenges that associated with female correctional officers was inappropriate relationships with male inmates often put in their male correctional officers in danger. There were some physical restraints that female officers didn't have work in a male institution. It was easy for the average female officer to get overpowered by male inmate, causing her to be raped, beaten or killed. Reference Schmalleger, Frank. Corrections in the 21st Century, 4th Edition. McGraw-Hill http://www.ncjrs.gov/pdffiles/shockny.pdf http://nicic.gov/pubs/1991/009504.pdf ?? ?? ?? ?? Corrections In The 21 Century 2 ...read more.