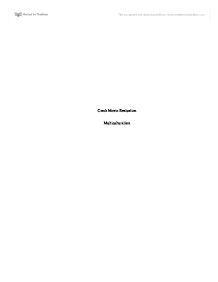 Crash from a Psychological Perspective

Crash Movie Evaluation Multiculturalism In the film Crash we are given a picture of all different kinds of social and multicultural differences, giving us an eye opening example of how these conducts and racisms affect our society. Two of the most obvious biases within the film are prejudice and stereotyping. These behaviors are viewed as thoughts and feelings that almost everyone has felt at some point. In the first scene we meet a Muslim man, attempting to buy a gun. The store owner is a Caucasian male that has a negative attitude towards the customer because of his Muslim background. The owner's stereotypical feelings set off negative attitudes because of the bad feelings he had about the Muslim race; being immediately associated with the Al Qaeda terrorist group of 9/11. The negative attitude and hostility observed in this particular scene, is an example of prejudice. Although it has always existed in humanity, most would assume it would have fizzled out by the 21st century because we are now better educated and informed in understanding that one group's actions should not be stereotyped to the entire race. Unfortunately in this film, it does the complete opposite and shows our "stereotyping by appearance" attitude. ...read more.

She criticizes him for what she sees as a cowardly, he insists he acted the only way he could, that when a white man has power there is no way to win, so you do what you can to survive. This is a perfect example of the 'White Privilege' that we've discussed in class. This exploitation of African Americans at the hand of white people would imply that racism is mostly institutional; however the thought behind the movie suggests that discrimination and racist attitudes are down to the people who enable it; for example Officer Ryan verbally abuses Shaniqua (Loretta Devine); a black case manager at an insurance company. She takes Ryan's racism with dignity as he unloads his frustration with the insurance company's rules about his father's care onto her. She seems to be a more reasonable character in the film. However this is short lived, in a key point at the end of the film. Shaniqua has a car crash were an Asian woman rear-ends Shaniqua's car. She then emerges from her car shouting "don't talk to me unless you speak American." The LAPD is represented by two characters and from two different perspectives. One perspective is from that of Officer Ryan. ...read more.

We need to learn to control prejudice and the stereotypes we hold against other groups, since these are our own attitudes and feelings that are learned and not innate we can teach ourselves to get rid of these negatives behaviors by not being judgmental and not having negative biases towards others. The key to changing stereotypes and prejudice is the responsibility of us as individuals. Each of us needs to take a better look at the assumptions that we make about other people and ask ourselves where those assumptions come from. Are they based on facts or personal experiences with others? Are your assumptions formed by things you have heard from others? Learned from the TV or media? Learned in school or from parents? Is it likely that some of your negative images are wrong; at least for some people? More often than not, the answer to that last question is likely to be "yes." Most groups have moderates and extremists, trying to get to know people as individuals instead of generalizing the whole group will trim down on the stereotypes you hold against others, and it is also likely to reduce the stereotypes others hold of us. On a day-to-day basis we will be faced with reactions; it is how we interpret the situation and our actions in response to those reactions that will shadow our perception of daily life. ...read more.