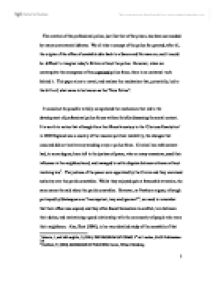 The creation of the professional police, just like that of the prison, has been surrounded by many controversial debates. We all take a concept of the police for granted; after all, the origins of the office of constable date back to a Saxon and Norman era, and it would be difficult to imagine today's Britain without the police. However, when we contemplate the emergence of the organised police force, there is no universal truth behind it. This paper aims to reveal, and analyse the mechanism that, potentially, led to the birth of, what came to be known as the "New Police". It would not be possible to fully comprehend the mechanism that led to the development of professional police forces without briefly discussing the social context. It is worth to notice that although from the fifteenth century to the 'Glorious Revolution' in 1688 England was a country of the massive political instability, the changes that occurred did not involve any standing army or police force. Criminal law enforcement had, to some degree, been left to the justices of peace, who on many occasions, used their influence in the neighbourhood, and managed to settle disputes between citizens without invoking law1. The justices of the peace were appointed by the Crown and they exercised authority over the parish constables. Whilst they enjoyed quite a favourable attention, the same cannot be said about the parish constables. ...read more.

Colquhoun analysis of the cost of crime in London docks resulted in Thames River Police creation in 1798, and the force enjoyed wide range of powers in areas concerned with property crime and disorder. Despite of all these experiments there was little support for any large scale organisation. Even Thames River Police was seen as being "repugnant to the spirit of English government"13. Opposition continued despite the fact that when first official statistics were published in 1805, they showed that crime was a serious problem. Not only working classes but also the gentry thought that professional force would lead to the increases power of the central government, which in turn could threaten liberty. Select Committee set up out of the initiative of Parliament concluded in 1822, that although such a service might lead to crime reduction, it was also "difficult to reconcile...with that perfect freedom of action and exemption from interference, which are the great privileges and blessings of society in this country"14. All the above arguments serve to document that the process of creation of the police force was not immediate, and the reformers actions generated a wide public hostility. How did Robert Peel manage to achieve his aim, despite so many decades of opposition? Historiographical debate, seeking to answer this question is led by two major themes; orthodox and revisionists. Traditional school portrays police as "necessary (in any) ...read more.