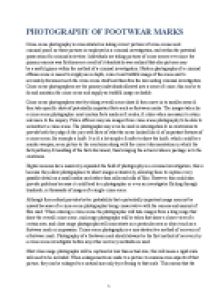 ﻿PHOTOGRAPHY OF FOOTWEAR MARKS Crime scene photography is concentrated on taking correct pictures of crime scenes and criminal proof, so these pictures is employed in a criminal investigation, and within the potential prosecution for criminal activities. Individuals are taking pictures of crime scenes ever since the primary camera was fictitious as a result of it absolutely was realized that also pictures may be a useful gizmo within the method of a criminal investigation. Modern photography of a criminal offense scene is meant to supply an in depth, correct and truthful image of the scene and to accurately document each the crime scene itself and therefore the succeeding criminal investigation. Crime scene photographers are the primary individuals allowed into a scene of crime, this can be to do and maintain the crime scene and supply as truthful image as doable. Crime scene photographers start by taking overall scene shots & then move in to smaller areas & then take specific shots of potentially important facts such as footwear marks. The images taken by a crime scene photographer must contain facts markers & scales, & rulers when necessary to retain relevance to the inquiry. Police officers may use images from crime scene photography to be able to reconstruct a crime scene. The photographs may even be used in interrogation & in courtrooms to provide both the judge & the jury with facts of what the scene looked like & of important features of a crime scene, for example a knife. It is & a lot simpler & safer to show the knife, which could be a murder weapon, as an picture to the courtroom along with the correct documentation in which the facts pathway & handling of the facts document, than bringing the actual evidence package in to the courtroom. ...read more.

the movement place upon the camera once the capture button is ironed, which can additionally cause a loss of focus or a perspective downside. The rack additionally allows the artist to possess his hands free for alternative tasks like managing the sunshine supply and exposure. A rack additionally makes it easier once photographing multiple footwear marks or impressions because it makes it easier to makeover from one place to a different at intervals criminal offense scene. To confirm everything is correct with a picture before the matters of exposure and lighting square measure proscribed the artist will use a cameras? finder to confirm that angles, image size and focus square measure all correct before trying to line the lighting and exposure. When photographing three dimensional footwear impressions a cameras opening should accommodate the depth of the footwear mark. The NPIA recommend an opening setting of between F16 & F22. For two dimensional footwear marks the NPIA recommend an opening setting of around F8 to F11. Figure 2 incident light There are many different types of lighting that could be used by a photographer at a crime scene. When photographing footwear marks and impressions. Some marks and impressions can be taken using natural light, or sometimes natural light has to be restricted; however more often than not artificial lighting will have to be used. The purpose of lighting is to achieve a contrast between a footwear mark and the soil or other surface the mark or impression lies in or upon. If natural light is not good enough to provide the image with enough contrast there are many artificial light sources that could be used by the photographer such as, reflectors, crime lights, slide projector, oblique LED's or fibre-optics, polarised light, or sometimes a camera flash can provide the needed contrast in the image. ...read more.

9. Set the camera so the footwear image is as large as possible in the view finder and within the printing parameters. 10. Select appropriate lighting or shading. 11. For two dimensional footwear marks consider the use of reflectors to obtain a more even distribution of light across the footwear mark. 12. Consider restricting any ambient light (natural or artificial) falling onto the footwear mark area in order to achieve the best effect of oblique light. 13. Work out exposure time to suit aperture and lighting selected. 14. Take several photographs, change position of the source of light to ensure that all areas of the footwear mark are correctly exposed.? Figure 7 this is image of the footwear impression in soil. In conclusion it's been proven that good quality pictures have many uses in the field of forensic science and the investigation of a crime. They?ll help SOCO/CSI/FS/FI and also the police, do a crime scene reconstruction (Gardner & Bevel, 2009), wherever the sequence of events leading up to, throughout and instantly once the crime is realised. Sometimes photographs area unit used as aids for witnesses, to recall more concerning what they saw (Kiley, 2006). pictures is faxed, announce and emailed between police forces and widely distributed within the media or throughout a neighbourhood in the search for a missing person, suspects for further items of evidence(Red sicker, 2001). Later within the criminal justice method judges and jury members are also conferred with photographs throughout a trial to assist they perceive the character of a crime (Kiley, 2006). Typicallypictures of an item of proof are going to be wont to stand in for the real factor if the item couldn't be far from the scene of crime for some reason, or if it's not possible to urge it into the court area. ...read more.