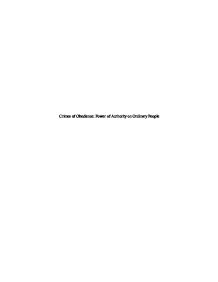 Crimes of Obedience: Power of Authority on Ordinary People

Crimes of Obedience: Power of Authority on Ordinary People Crimes of Obedience: Power of Authority on Ordinary People All the crime in the world are not committed as criminals. To do immoral, illegal things, a person should not be s******c ideas and mental disaster. There are a lot of people who commit a crime or hurt someone with the effect of some another people. The people who make an effect on those who act morally or legally disonant are mostly authority figure who give order. Feeling of inevitability of obeying to authority and avoiding from punishment overcome personal values and ideas, and make people behave immorally through the commands of authority.As Milgram's experiment and Holocaust higlihted, although being ordinary people, under certain conditions, people will act in ways that are cognitively and morally dissonant if obeying authority. People behave different than their normal behaviors when they are under authority. They can do some evil things if authority orders to do it. The biggest and most important study to observe changing behavior of ordinary people under an authority figure was set up in 1961, at Yale University by Stanley Milgram, a social psychologist. ...read more.

The actions that normally hurt the concept of self, contrast with the beliefs possessed are acted when ordered by an authority figure. The reason for those is that obedient don't undertake possible bad consequences of their actions under authority. And so, they obey without refusing even the commands contrast with their own ideas and concerns about hurting someone. In the agentic state, when the moral and legal burden of actions is left on the authority, the feelings of responsibility, morality, regret and compunction disappear. Because they think that if I were, I won't hurt him or her but if authority wants, I can do because it don't matter me. So, as Russell and Gregory indicates, the agentic state "helps to make morally undoable doable by minimizing the levels of sensory perception, reducing emotional strain and enabling people to deny themselves and others responsibility for their own individual actions" (p.341). The immoral and evil acts happened with commands of authority are called "crimes of obedience" by Sherman. According to Sherman, crimes of obedience "become possible when individuals abandon personal responsibility for actions taken under superior orders, continuing obey when they ought to be disobeying "(p.287). ...read more.

The people who took role in the killing millions of people have normal, ordinary people who follow the orders and obey the authority as participants in Milgram's experiment. Adolf Eichmann, the director of n**i deportation, is mostly known and studied actor of Holocaust. He was considered as a "desk-murderer" who worked as a banal bureaucrat under authority of Hitler (Jackson, p.248). Jackson says that Eichmann was in the belief of that do not obey to his authority is more immoral and criminal than killing people (p.240). The internalization of authority can observe on Eichmann because he became an admirer of Hitler. He was a "neither perverted nor s******c... (but) terribly and terrifyingly normal" (p.335).He just was doing his job that required obeying his superior and following orders as all the other ordinary criminals in Holocaust. He was most marginal example of power of authority to make people do morally dissonant things. Even if every authority figure and condition make a different effect on people, even if people has various reason to obey to authority, finally and mostly, they chose to obey the authority as Milgram highlighted. Under any authority, people would act in a way that is morally, cognitively dissonant despite the fact that they are ordinary people in their normal life. Holocaust is most terrible and disturbing event that claims the power of obedience to authority. ...read more.