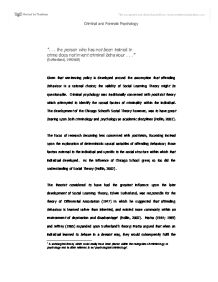 ". . . the person who has not been trained in crime does not invent criminal behaviour . . ." (Sutherland, 1992:88) Given that sentencing policy is developed around the assumption that offending behaviour is a rational choice; the validity of Social Learning Theory might be questionable. Criminal psychology was traditionally concerned with positivist theory which attempted to identify the causal factors of criminality within the individual. The development of the Chicago School's Social Theory however, was to have great bearing upon both criminology and psychology as academic disciplines (Hollin, 2002). The focus of research becoming less concerned with positivism, focussing instead upon the exploration of deterministic causal variables of offending behaviour; those factors external to the individual and specific to the social structure within which that individual developed. As the influence of Chicago School grew, so too did the understanding of Social Theory (Hollin, 2002). The theorist considered to have had the greatest influence upon the later development of Social Learning Theory, Edwin Sutherland, was responsible for the theory of Differential Association (1947) in which he suggested that offending behaviour is learned rather than inherited, and existed more commonly within an environment of deprivation and disadvantage1 (Hollin, 2002). Matza (1964; 1969) and Jeffrey (1965) expanded upon Sutherland's theory; Matza argued that when an individual learned to behave in a deviant way, they would subsequently fulfil the societal role deviancy; while Jeffreys, in his theory of Differential Reinforcement, explained how learned deviance is then reinforced by positive experiences: financial and material gain, approval and a growth of status within their society (Hollin, 2002). ...read more.

However, in 1977, influenced by the development of social theory, Bandura developed Social Learning Theory, which like many other social theorists attempted to make sense of the relationship between the social environment and offending behaviour and reasoned that such behaviour is the product of social learning and imitation (Hollin, 2002; Putwain and Sammons, 2002). Bandura theorised that the 'influential model' (the observed) is selected by the observer by their status; whether that be because they are a parent, sibling or 'significant other' (Hollin, 2002; Putwain and Sammons, 2002). Replication of that 'models' behaviour will then be dependent upon the observed benefits or sanctions that are meted out in response to their actions, a process termed: 'vicarious reinforcement and punishment'; a theory previously suggested by Miller and Dollard (1941), (Howitt, 2006; Putwain and Sammons, 2002). That an observation of unpunished bad behaviour is an antecedent to the future behaviour of the observer is hardly surprising; in fact, as early as 1942 Shaw and McKay had written that offending behaviour transcends the generations by a child's observations of their family members 'speech, gestures and attitudes', a process defined by Muncie as 'environmental determinism' (Muncie, 2001). Social Learning Theorists also believe that learned behaviour can be maintained by the 'internal rewards' of the excitement prior to and during the criminal activity, and the sense of achievement achieved when they remain undetected. ...read more.

Certain criticisms have been levied at the continuous effort to identify the antecedents of offending behaviour and the provision of early-intervention programmes for those deemed at risk of offending on the basis that there is a risk of over-prediction of criminality and that those labelled as possible future offenders may go on to fulfil that expectation (Smith, 2007). In conclusion therefore, while sentencing policy is developed around the assumption that the offender is an autonomous being, possessing sufficient agency to be considered fully responsible for their own actions (Putwain and Sammons, 2002), Social Learning Theory runs counter to this understanding. Having originated from sociological knowledge, in particular that of Sutherland, Social Learning Theory identifies the key causal variables of offending behaviour to be deterministic The concept of the 'model' is central to Social Learning Theory; Bandura reasoned that offending behaviour is developed through the observation of the imposition of rewards and sanctions for particular behaviours, thus leading the observer to internalise the values and behaviours that they observe. Critiqued for denying the offender with any significant level of autonomy, Social Learning Theory has nevertheless filtered through into the practice of criminal justice practitioners; in particular those developing and delivering early intervention provisions and parenting interventions, and in the development of risk focussed diagnostic assessment tools. The utilisation of Social Learning Theory in the psychological study of criminality has aided the formulation of provisions which challenge the thought processes and cultural values of the offender; thereby working to improve social comprehension and increasing the range of available opportunity. ...read more.