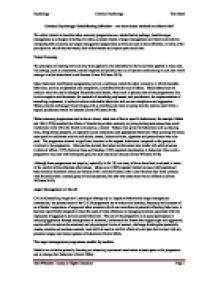 Criminal Psychology: Rehabilitating Offenders are there better methods to achieve this?

Criminal Psychology: Rehabilitating Offenders - are there better methods to achieve this? The author intends to describe token economy programmes as a rehabilitation package, describe anger management as a therapy including CALM as a current model of anger management and finally conclude by comparing both economy and anger management programmes as they are used to treat offenders, in terms of the principles on which they are based, their effectiveness and impact upon recidivism. Token Economy The principles of learning have not only been applied in the laboratory but have also been applied in many real-life settings, such as classrooms, mental hospitals and prisons; the use of operant conditioning in such real-world settings is called behavioural modification (Ewan Williams 2010). Many behaviour modification programmes rely on a technique called the token economy, in which desirable behaviour, such as co-operation and compliance, is reinforced by the use of tokens. These tokens have no intrinsic value but can be changed for primary reinforcers, when used in prisons most of the programmes also involve negative reinforcement, the removal of something unpleasant, and punishment, the implementation of something unpleasant, in order to reduce undesirable behaviour such as non-compliance and aggression. Tokens may be exchanged for privileges such as watching television or going into the exercise yard while a typical punishment would be isolation (Ewan Williams 2010). Token economy programmes tend to have a direct, short term effect on specific behaviours, for example Hobbs and Holt (1976) recorded the effects of introducing a token economy to young delinquents across three small institutional units while the fourth unit acted as a control. Tokens were given for behaviour such as obeying rules, doing chores properly, co-operative social interactions and appropriate behaviour when queuing for meals; extra positive reinforcers such as soft drinks, sweets, leisure activities, cigarettes and passes home were also used. The programme showed a significant increase in the targeted behaviours compared to the group not involved in the programme. ...read more.

Eysenck, 1997). According to Eysenck (1998) the P dimension is also based on the cortial arousal level in the central nervous system and is subsequently linked to conditionability and conscience development, therefore impulsivity would be the crucial trait in the link between conditionability and personality; impulsivity belongs to P and conditionability is linked to cortical arousal therefore high P scorers, similarly to high E-scorers have a low level of cortical arousal, thus less likely to condition and more prone to developing antisocial behaviour (Richard Gross, 2010; CBS Interactive 2010). The Self-fulfilling Prophesy The social reaction, or labeling theory as it is sometimes known, evolved over time from as early as 1938 (Wellford, 1975). Basically it states that as a person commits a crime, they will receive the label of "criminal". When a person is labeled as such by society, they are likely to accept this label as a part of them. Because the person now thinks of him/herself as a criminal, he/she is now likely to continue in his/her criminal behaviour (Becker, 1963) (Richard Gross, 2010). This label is usually placed upon an individual during what is known as a 'degradation ceremony,' in which the accused or defendant is officially labelled as a 'criminal' because we as a society state they are; the focus of this theory is not on the person committing the crime but on the response of the general public, or audience and the perceived consequences of a said response. In layman's terms, the audience labels the actor, or the law, as a concept of man, labels the defendant and this label can influence their behaviour for the rest of their lives; such is the case of self-fulfilling prophecy (Richard Gross, 2010). Bowlby's Maternal Deprivation Hypothesis Bowlby (1951) argued that something like imprinting occurs in humans, he developed several main claims, primarily that we have evolved a biological need to attach to our main caregiver, usually our biological mother; possessing one special attachment is termed monotropy, forming this attachment has inherent survival value as remaining close to our biological mother ensures food and protection. ...read more.

Therefore given the above, should individuals be unfortunate enough to lack the necessary, parental and social support during childhood and/or adolescence, and/or suffer some form of social, physical and/or psychological degradation and/or trauma it is not particularly surprising that such individuals may gain negative cognitive and/or psychological thought processes potentially leading to criminal acts. The criminal act is therefore a result of the individual's conditioning, which though criminal in definition, is simply a repercussion of a less than satisfactory childhood; therefore we as a society are at least partially to blame for allowing the individual to suffer, therefore, do we have the right to label that individual as a criminal or as an offender? (Coordination Group Publications, 2009; Richard Gross, 2010). A person does something or acts a certain way so that they are deemed 'criminal' or likely to commit crime, we as a society then label them as criminal, and they then go on to lead criminal lifestyles as a direct result of our labelling them. Their crimes and adherence to the labels that they are fitted with are referred to as 'secondary deviance,' these crimes are considered a direct result of us calling the supposed criminal, a criminal (Richard Gross, 2010). Reference List: Richard Gross, 2010 Psychology: The Science of Mind and Behaviour, Sixth Edition Coordination Group Publications, 2009 AS & A2 Psychology Exam Board AQA A CBS Interactive 2010 http://findarticles.com Personality, delinquency and criminal recidivism accessed on the 10th May 2011 at 19:45 hrs CBS Interactive 2010 http://findarticles.com Research foundations of moral and ethical education accessed on the 10th May 2011 at 23:05 hrs Kendra Cherry 2011 http://psychology.about.com Parenting Styles: The four styles of parenting accessed on the 10th May 2011 at 23:34 hrs Crown 2004 http://www.hmprisonservice.gov.uk Calm after the storm accessed on the 11th May 2011 at 11:39 hrs Ewan Williams 2010 http://www.crimepsych.com Violence, addiction and the adult offender: a token economy approach to treatment accessed on the 11th May 2011 at 11:42 hrs ?? ?? ?? ?? Psychology Criminal Psychology Tom Seath Gary Wheadon. Access to Higher Education Page 1 ...read more.