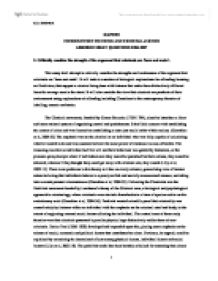 Criminals Born or Made

SLSP0091 INTRODUCTION TO CRIME AND CRIMINAL JUSTICE ASSESSED ESSAY QUESTIONS 2006-2007 2. Critically consider the strength of the argument that criminals are 'born not made'. This essay shall attempt to critically consider the strengths and weaknesses of the argument that criminals are 'born not made'. It will look at a number of biological explanations for offending focusing on Positivism, that support a criminal being born with features that make them distinctively different from the average man in the street. It will also consider the view that criminals are products of their environment using explanations of offending including Classicism to the contemporary theories of labelling, anomie and strain. The Classical movement, founded by Cesare Beccaria (1738-1794), aimed to introduce a fairer and more rational system of organising control and punishments. It had little concern with establishing the causes of crime and was focused on establishing a more just social order within society. (Carrabine et al, 2004:32) The emphasis was on the criminal as an individual who was fully capable of calculating what he wanted to do and was assumed to have the same power of resistance as non-offenders. The reasoning was that an individual had free will and their behaviour was guided by hedonism, or the pleasure-pain principle where if individuals saw they would be punished for their actions, they would be deterred, whereas if they thought they could get away with criminal acts, they would (Lilly et al, 2002:15). ...read more.

Through this, the city could be delineated into five zones. What was named the zone in transition; containing rows of deteriorating tenements, often built in the shadow of aging factories, was the greatest cause for concern. It was the least desirable living area, residents were constantly displaced, weathering waves of immigrants and migrants too poor to settle elsewhere (Lilly et al, 2002:34). Immediately obvious was the concentration of pathologically deviant behaviour in the zone of transition. Deviance, while present elsewhere, was hugely conspicuous in the transition zone (Downes & Rock, 2007:54). Wirth (p.236) cited in Downes and Rock (2007:55) stated the reasons behind this: 'contacts are extended, heterogeneous groups mingle, neighbourhoods disappear, and people, deprived of local and family ties, are forced to live under ... loose, transient and impersonal relationships.' Identified with Chicago school is Sutherland (1956), who states in his theory of differential association, that any individual's preference for conformity or deviance relates to the frequency of association with others who either encourage conventional behaviour or deviance. He claims that criminal behaviour is learnt whilst interacting through communication, principally within close personal groups. Motives are also learnt through definitions of the law as being favourable or unfavourable. This process then is no different to the process involved in any form or learning (Carrabine et al, 2004:57). ...read more.

A dopamine, noradrenaline and serotonin imbalance which may be conductive to deviant behaviour. Also, there is some evidence that neurological defects are more common among excessively violent people than among the population in general. EEG (electroencphalograph) readings on a number of adult criminals have similarities to those of normal people at a younger age, signifying brain immaturity. This essay attempted to critically analyse the argument that criminals are 'born not made'. It looked at a number of biological explanations for offending and also considered the view that criminals are products of their environment. On the whole, current evidence for biological research is at its best, limited. Researchers often have difficulty separating biological factors from social ones and unrepresentative samples are common in such research. After looking at various reasons behind deviant behaviour, it is not unreasonable with the evidence at hand, to conclude that crime is probably caused by a number of interrelated factors, rather than biology alone. What is most promising about biological research is that with recent advances in science and genetics might come the day where it is proved irrefutably that criminals are born with a deviant gene. However, until then, the various sociological and criminological explanations claiming that criminals are moulded by society seems more likely. Ultimately, further research is needed before any conclusive reasons for deviance can be drawn. ...read more.