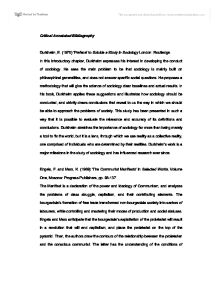 Critical Annotated Bibliography Durkheim, E. (1970) 'Preface' to Suicide a Study in Sociology London: Routledge. In this introductory chapter, Durkheim expresses his interest in developing the conduct of sociology. He sees the main problem to be that sociology is mainly built on philosophical generalities, and does not answer specific social questions. He proposes a methodology that will give the science of sociology clear baselines and actual results. In his book, Durkheim applies these suggestions and illustrates how sociology should be conducted, and strictly draws conclusions that reveal to us the way in which we should be able to approach the problems of society. This study has been presented in such a way that it is possible to evaluate the relevance and accuracy of its definitions and conclusions. Durkheim stretches the importance of sociology far more than being merely a tool to fix the world, but it is a lens, through which we see reality as a collective reality, one comprised of individuals who are determined by their realities. ...read more.

The bottom line of the Manifest is a call to communists to radically dispose of their existing social patterns by gaining the raging support of a united proletariat - a majority that has everything to gain. Clearly, communism has self-destructed, but its analysis of society is still valid in many ways today. Freud, S. (1930/1961) 'Civilization' in Lemert, C. (2004) Social Theory: The Classical and Multicultural Readings Oxford: Westview, Pp. 145-148. Freud discusses the analogy between the process of civilization and the unfolding psychology of the individual. He argues that the origins of the cultural and individual super-egos are parallel, as they are based on the primal fathers' footprints. When these super-egos deal with human interrelations, they demand idealistic behaviours from their subjects. One of the greatest values (and obstacles) humans have ever idealized is the commandment of "Love thy neighbour as thyself" - a value that has never been fulfilled by any society. In his analogy of the cultural and individual super-egos, Freud claims that they do not take in mind, or care, if their demands can be fulfilled by their subjects. ...read more.

The big lie under which colonization masks itself is the generous project of helping "barbarian" societies into modernity. C�saire argues that colonization has not built contact with other civilizations, apart from shedding blood of the innocent, and to justify it for a greater "ideology". He explains that colonialism has a deep root in Nazism, and such justifications are a clear sign of a perverted civilization. Later on C�saire talks about how the colonized have been turned into things, whose existence is solely to serve the "civilized", and thus eliminating their right for history. Further more, he explains how Europe represses these cultures, while it pretends to be the climax of humanity. C�saire's main argument is not only the dehumanization of the colonized but also the dehumanization of the colonizer himself. He sums up his approach hopefully; Europe cannot redeem itself from its transgression against humanity unless it forms a proletarian unity. It needs a revolution that will throw back the dehumanized bourgeoisie to reflect on its past, while the proletariat establishes universal equality. Although his analysis of the European condition is accurate, C�saire's view of the future did not sustain. ...read more.