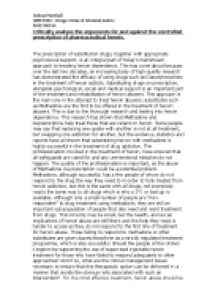 Critically analyse the arguments for and against the controlled prescription of pharmaceutical heroin.

﻿Joshua Marshall CRM3330 ? Drugs, Crime & Criminal Justice M00298914 Critically analyse the arguments for and against the controlled prescription of pharmaceutical heroin. The prescription of substitution drugs, together with appropriate psychosocial support, is an integral part of today?s mainstream approach to treating heroin dependence. This has come about because over the last two decades, an increasing body of high-quality research has demonstrated the efficacy of using drugs such as Diacetylmorphine in the treatment of heroin addicts. Substituting drugs on prescription, alongside psychological, social and medical support is an important part of the treatment and rehabilitation of heroin abusers. This approach is the main one in the attempt to treat heroin abusers; substitutes such as Methadone are the first to be offered in the treatment of heroin abusers. This is due to the thorough research and testing into heroin dependence. This research has shown that Methadone and buprenorphine help treat those that are reliant on heroin. Some people may say that replacing one opiate with another is not at all treatment, but swapping one addiction for another, but the evidence, statistics and reports have all shown that substituting heroin with methadone is highly successful in the treatment of drug addiction. The professionalism involved in the treatment of heroin, have ensured that all safeguards are cared for and any unintentional mistakes do not happen. The quality of the professionalism is important, as the abuse of Methadone via prescription could be a potential problem. Methadone, although successful, has a few people of whom do not respond to the drug the way they need to in order to fully treated from heroin addiction, but this is the same with all drugs, not everybody reacts the same way to all drugs which is why a 2nd, or backup is available. Although only a small number of people are ?non-responders? to drug treatment using methadone, they are still an important sub-population of people that also need and want treatment from drugs. ...read more.

Clinical trials have been started in the Netherlands, and there are ongoing debates about trials in other countries, when discussing the usage of heroin in the pharmaceutical market there are many factors that need to be included, such as; scientific evidence, political, social and clinical factors. When using diacetylmorphine pharmaceutically, it could also be used in the treatment of opiate dependence. Giving a recovering addict a significantly smaller dosage of clean controlled heroin regularly could help an addict slowly recover from their addiction. There are many arguments surrounding the legalisation of diacetylmorphine on the pharmaceutical market, as some heroin addicts may worry about the side effects of methadone, or may refuse to try it altogether. Using diacetylmorphine could attract people into treatment, because they know that the drugs used will actually work, not only will it attract more addicts but it may persuade the users to stay in a treatment programme for longer. By giving a user diacetylmorphine, they are also getting safe medical treatment where the user can be looked after and it can also reduce crime, as the crime used to afford their habit will no longer be needed. Profits gained from illegal drug selling will also be significantly reduced if people see that safe, medical grade diacetylmorphine is available when in treatment. Also, medical grade heroin is guaranteed clean, safe and readily available when a part of a treatment programme. Pharmaceutical heroin will also reduce the risk of infection as the injections are immediately disposed of after each use; this also eradicates the risk of overdose as qualified professionals give injections. Users may assume that applying for a treatment programme may ensue legal implications but discreet, supervised injections could see the use and abuse of heroin rapidly decrease. The European Monitoring Centre for Drugs and Drug Addiction (EMCDDA) wrote a report on heroin assisted treatments in April 2012, part of this report stated ?Findings from international trials now suggest that the supervised use of medicinal heroin can be an effective second-line treatment for this small, and previously unresponsive, group. ...read more.

This debate could go on forever, the benefits of taking diacetylmorphine are endless and it could change people?s lives for the better, but it can also cause the complete opposite effect. I believe the way in which we use diacetylmorphine in this present day is the best solution we have as of yet. The cautious attitude doctors have in relation to the prescribing of this drug is good. I believe diacetylmorphine should only be used as a last resort in the treatment of patients and drug users if it were any more available pharmaceutically it could cause an unwanted, but significant increase in heroin abuse. There are drug black markets everywhere, in every country, every city, and even online, people can order pretty much any drug they want online if they know where to look so if people develop a reliance on diacetylmorphine they could order more as soon as their prescription runs out. The implications of this drug could ruin many people?s lives, but could save the same amount easily. Even when considering how diacetylmorphine could help recovering heroin addicts. The slow weaning off heroin, using a weaker albeit purer strain of the same substance, although effective, it almost seems pointless. I believe we, as a nation should stick to the way we control and use diacetylmorphine the way we do now. Using it in any other form of medicinal treatment could cause a spike in the use of illegal heroin abuse therefore causing a downward spiral of drug abuse in the UK, in particular, heroin. Diacetylmorphine is an amazing, highly effective drug that has multiple uses, but even so, the many implications and risks involved in using this drug in the widespread medical world of the UK seems to be a high risk that many are unwilling to take. The risks and the benefits are equal in weighting, therefore unless a new, medical safe strain was created, using this anymore that we already do could pose a risk to the welfare and overall health of the UK population. ...read more.