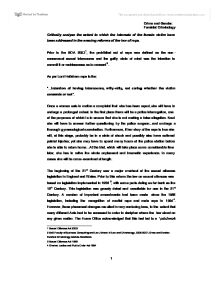 Critically analyse the extent to which the interests of the female victim have been addressed in the ensuing reforms of the law of r**e. Prior to the SOA 20031, the prohibited act of r**e was defined as the non-consensual s****l intercourse and the guilty state of mind was the intention to commit it or recklessness as to consent2. As per Lord Hailsham r**e is the: "...intention of having intercourse, w***y-nilly, not caring whether the victim consents or not". Once a woman sets in motion a complaint that she has been raped, she will have to undergo a prolonged ordeal. In the first place there will be a police interrogation, one of the purposes of which is to ensure that she is not making a false allegation. Next she will have to answer further questioning by the police surgeon...and undergo a thorough gynaecological examination. Furthermore, if her story of the r**e is true she will, at this stage, probably be in a state of shock and possibly also have suffered painful injuries; yet she may have to spend many hours at the police station before she is able to return home...At the trial, which will take place some considerable time later, she has to relive the whole unpleasant and traumatic experience. In many cases she will be cross-examined at length. The beginning of the 21st Century saw a major overhaul of the s****l offences legislation in England and Wales. Prior to this reform the law on s****l offences was based on legislation implemented in 19563, with some parts dating as far back as the 19th Century. This legislation was grossly dated and unsuitable for use in the 21st Century. A number of important amendments had been made since the 1956 legislation, including the recognition of marital r**e and male r**e in 19944. However, these piecemeal changes resulted in very confusing laws, to the extent that many different Acts had to be accessed in order to decipher where the law stood on any given matter. ...read more.

The debate within the review was not whether Morgan should be changed per se, but rather how it should be changed, and what, if anything should replace it. Once a woman sets in motion a complaint that she has been raped, she will have to undergo a prolonged ordeal. The beginning of the 21st Century saw a major overhaul of the s****l offences legislation in England and Wales. The criticisms feminist academics and activists have highlighted in terms of r**e law in England and Wales are similar to those described in other countries with adversarial legal systems. Most r**e victims who report the offence to the police will never even see their case reach court, never mind see the perpetrator convicted for r**e. While more and more men are being reported to the police for r**e, the proportion that is convicted for r**e has been steadily falling since records began. The actus reus relates to a lack of consent. There are generally three lines of defence used in r**e cases; that intercourse never took place, that it took place but not by the accused or that it took place but that the victim consented to it or that the accused believed that the victim consented to it. After much debate, the SOA 2003 defined the mens rea of r**e as if 'A does not reasonably believe that B consents'27. Whether or not the belief is classed as reasonable is determined after regarding all the circumstances, including any steps A may have taken to ascertain whether B consents. Despite so many reforms, it could still be said that the legal system fails to take in to account the interests of the female victim because the stigma attached to r**e is still there. The reform can be seen as more of a judicial reform, to aid judges to arrive at a firm conclusion than as a reform which has in particular taken the interests of the r**e victim into consideration. The research conducted by Amnesty International still suggests that a third of the UK population still blame the woman for being raped. ...read more.