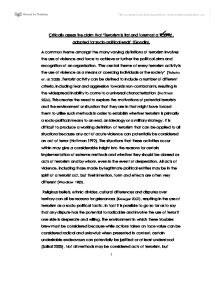 Critically assess the claim that Terrorism is first and foremost a tactic, adopted for socio-political ends

Critically assess the claim that 'Terrorism is first and foremost a tactic, adopted for socio-political ends' (Goodin). A common theme amongst the many varying definitions of terrorism involves the use of violence and force to achieve or further the political aims and recognition of an organisation. 'The central theme of every terrorism activity is the use of violence as a means of coercing individuals or the society' (Yokota et. al. 2008). Terrorist activity can be defined to include a number of different criteria, including fear and aggression towards non-combatants, resulting in the widespread inability to come to a universal characterization (Hoffman 2006). This creates the need to explore the motivations of potential terrorists and the environment or situation that they are in that might have forced them to utilise such methods in order to establish whether terrorism is primarily a socio-political means to an end, an ideology or a military strategy. It is difficult to produce a working definition of terrorism that can be applied to all situations because any act of acute violence can potentially be considered an act of terror (Hoffman 1992). The situations that these activities occur within may give a considerable insight into the reasons for certain implementation of extreme methods and whether they should be classed as acts of terrorism and by whom, even in the event of desperation. All acts of violence, including those made by legitimate political entities may be in the spirit of a terrorist act, but their intention, form and effects are often very different (Wardlaw 1982). Religious beliefs, ethnic divides, cultural differences and disputes over territory can all be reasons for grievances (Krueger 2007), resulting in the use of terrorism as a socio-political tactic. In fact it is possible to go so far as to say that any dispute has the potential to radicalise and involve the use of terror if one side is desperate and willing. ...read more.

The scenario in which the act is committed must be considered alongside the target and intention (Marks 2006; Coady and O'Keefe 2002) because in relation to the examples of the Taliban and French Resistance there is evidence to suggest non-terrorist activity but rather a form of legitimate defence, in the form of a socio-political tactic, even though certain activities can be perceived as terrorism when taken out of context. The theme that terrorism is predominately a socio-political tactic is compelling. However, there are of course times that can be highlighted where acts of terror can take the forms of genocide or domination for reasons that are not so politically orientated. However, the fact remains; on the whole if it is not a matter of politics and social change then it should simply falls into the class of a criminal act. More recently the media, along with the recent Bush administration (Smith 2008) has stretched the meaning of the term terrorism to imply any act of extreme violence and this has helped to blur the boundaries of what actual terrorist activity may involve. With this established, it is possible to return to the question of whether it is still possible to label certain violent socio-political methods as terrorist when the plight may be justified through domination, occupation or unavailability of opportunities for a democratic solution. It will ultimately depend on the moral standing of who is considering such a possibility (Henkin 2006). This is because differing belief systems held by varying individuals may allow them to see this possibility as a justified means to an end or just as equally condemn any act of violence regardless of the situation that they are committed as wrong. However, the fact remains, it can still be defined as a tactic whether it is morally wrong or not. It seems terrorism can be used as an offensive tactic or a defensive strategy. ...read more.

These are not directly political motives but more specific grievances that have a direct aim and short-term result, apart from the exception of territorial disputes that have the potential to go on unremittingly. It is obvious that terrorism is indeed first and foremost a socio-political tool that will often be utilised by varying groups intending to redress their grievances especially those with long-term goals or matters involving territorial disputes. However, it is crucial that the situation and intent surrounding these activities are considered because it is possible to deny the abhorrent label of terrorism over certain organisations depending on the moral justification and desperation of the situation or environment that they find themselves within. These factors have the potential to relieve the term of terrorism and involve the more suitable phrases of military tactics or social revolution. Freedom fighters and revolutionaries may well hold the moral high ground and ultimately it depends on one's own belief system to establish whether violence can be used in certain situations or not at all under any circumstances. State terrorism is a real phenomenon and just because there may be a politically legitimate act, ratified by the states parliament or approved by the people does not necessarily excuse the label of terror. Of course, just like the freedom fighter or revolutionaries the government concerned may well hold the moral high ground; it all depends on the situation. The fact remains that intention is another key aspect to clarifying if an act is that of miscalculation or necessity because if something unintended happens it cannot be an act of terror, only incompetence or something similar. Organisations that have long-term terrorist intentions will be more socially and politically motivated. However, short-term acts of specific terrorism may have a more practical purpose such as the release of prisoners, economic aims, revenge or disputes over territory, even if they are usually motivated by socio-political ends. Word count: 3, 287. ...read more.