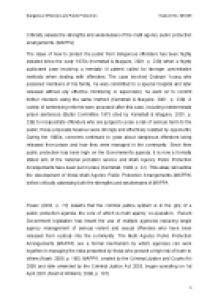 ﻿Dangerous Offenders and Public Protection Student No. 481365 Critically assess the strengths and weaknesses of the multi agency public protection arrangements. (MAPPA) The issue of how to protect the public from dangerous offenders has been highly debated since the early 1970s (Kemshall & Maguire, 2001, p. 239) when a highly publicised case involving a mentally ill patient called for stronger preventative methods when dealing with offenders. The case involved Graham Young who poisoned members of his family, he was committed to a special hospital and later released without any effective monitoring or supervision, he went on to commit further murders using the same method (Kemshall & Maguire, 2001, p. 239). A variety of sentencing reforms were proposed after this case, including indeterminate prison sentences (Butler Committee 1975 cited by Kemshall & Maguire, 2001, p. 239) to incapacitate offenders who are judged to pose a risk of serious harm to the public, these proposals however were strongly and effectively resisted by opponents. During the 1980s, concerns continued to grow about dangerous offenders being released from prison and how they were managed in the community. Since then public protection has been high on the Government's agenda, it is now a formally stated aim of the national probation service and Multi Agency Public Protection Arrangements have been put in place (Kemshall, 1998, p. 22). This essay will outline the development of those Multi Agency Public Protection Arrangements (MAPPA) ...read more.

Not only will this lack of resources mean more of a reliance on actuarial tools rather than professional judgement but may have the effect of compromising rather than enhancing public protection (Nash & Williams, 2008, p. 3). A further strength of MAPPA is that the multiple needs of the offender can be met by a multi agency approach. It is acknowledged (Yakeley & Taylor, 2011, p. 174) that the identification and management of risk is a complex and difficult task, risk has dynamic variables that can be influenced by a variety of factors and circumstances that need regular monitoring. Offenders have multiple needs (McSweeney & Hough, 2006, p. 114), involving a variety of differing factors and circumstances, and as such, agencies such as probation rely on outside agencies to assist with those needs. Kemshall & Wood (2007, p. 215) argue that the most effective method to manage offenders is if all the relevant agencies work together and MAPPA provides a framework within which different agencies collaborate in identifying and managing the risks posed by relevant offenders. This ensures the offender is receiving the necessary supervision in order to maintain a non-criminal future. One of the central aspects of effective Multi Agency working and MAPPA (Nash, 2006, p. 153) is coordination between the agencies. A key weakness with MAPPA is that the different agencies involved vary in their core aims and core practices; McAlinden (2007, p. ...read more.

However the problem here (Nash & Williams, 2008, p. 117) is that although professional judgement and risk assessment tools may provide an indication about the offenders likelihood of reoffending no one actually knows for sure, except for maybe the offender. The effectiveness and success of MAPPA is therefore based on the assumption that the offender would reoffend (Nash & Williams, 2008, p. 119). Indeed, Wood et al (2007, p. 8) in their research found that the definition of effectiveness within MAPPA was underdeveloped, partly because it is difficult to clarify and measure. They also recommended that MAPPA needed to develop ways of measuring effectiveness. All criminal justice agencies have their strengths and weaknesses, the integration of them all into MAPPA aimed to create a solution to the weaknesses and to develop greater strengths (Kemshall, 2010, p. 212); MAPPA has been a major development in working towards the competent management of violent and sexual offenders and protecting the public. MAPPA provides a framework within which many different agencies can come together, share information and intelligence, and put effective interventions in place that meet the offenders needs as well as the need to protect the public. However, difficulties remain and whilst some can be overcome with enhanced training and clearer boundaries, others require increased resources to meet increasing demands. It has been acknowledged that MAPPA processes and systems have improved since its inception (Nash & Williams, 2008, Kemshall, 2010) and perhaps MAPPAs greatest strength will be that it continues to learn from their experiences and evolve. ...read more.