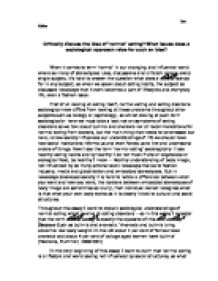 Critically discuss the idea of normal eating? What issues does a sociological approach raise for such an idea?

Ilze Kalke Critically discuss the idea of 'normal' eating? What issues does a sociological approach raise for such an idea? When it comes to term 'normal' in our changing and influential world where so many of stereotypes rules, discussions and criticism among every single subject, it's hard to answer the question what does a normal stands for in any subject, so when we speak about eating habits, the subject so discussed nowadays that it even becomes a part of lifestyles and everyday life, even a fashion issue. First of all looking at eating itself, normal eating and eating disorders sociological view differs from looking at these problems throughout other subjects such as biology or psychology, so whilst looking at such term sociologically- here we must take a look not on symptoms of eating disorders as we talk about bulimia and anorexia nor at recommendations for normal eating from doctors, but the main thing that needs to be stressed out here, is how society influences our understandings of life we should have how social institutions informs us and even forces us to live and understand orders of things. ...read more.

So what are social institutions that affect the body image and forms societies mind about how you should look, eat and act. Looking at eating habits and roots for eating disorders in micro scale, it's family, friends, young girls affected by the teenage idols, when they are discussed in magazines and often criticised for getting fat, I would also claim that schools do not pay enough attention to how young minds are affected by unexplained stereotypes and how many attention is drawn to outlook starting with an early age. When it comes to meso scale, such institutions as a beauty pageant for kids, modelling school for youngsters, they do stress out the attention to beauty, not paying so much attention about eating habits and explaining healthy lifestyle. As a macro scale I can bring an example of American and Western developed societies 'The impact of Western European and American attitude towards the cultivation of bodily appearance, as well as conflicting social role expectations for women that have become a worldwide phenomenon, have been profoundly influential'(Gordon;2000:7) It almost seems like these discussions about eating disorders and normal eating is a way of women reaction to given rights and stereotypes in the world - a price to pay for living in men's world. ...read more.

For Mauss the body is a physiological potentiality which is realized socially and collectively through a variety of shared body practices within which the individual is trained, disciplined and socialized.'(B.Turner; 2001:25) So as the body is your main instrument to socialise, here I can mentions the power of first impression, where your appearance is all that matter, (where your photo is obligatory when you send your CV and even job adverts mentioning to 'look at yourself critically' before sending your application) it is understandable that looking good for whatever price it takes is an issue today. So we can conclude that normal eating nowadays cannot be divided as a single terms showing what is right and what is wrong, to provide yourself a normal eating it is not necessary to have a healthy lifestyle it is essential to have a healthy attitude towards yourself not to get influenced by negative social structures in any social levels whether it is your peers, your idols our the society you live in. In our postmodern society to be normal often means to become an individual who does not search an answers for becoming normal in newspapers or magazines. ...read more.