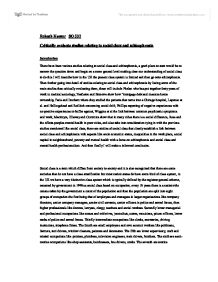 But the authors of this also state that it is not just social class that this effects but gender because men have higher mortality rates at all ages, and women have higher rates of mental illnesses that's according to gender differences also there is the issue of race "African Americans have higher rates of mortality at all ages, renal failure and stroke but lower rates than whites of coronary heart disease" Rogers and Pilgrim (2005:44) and also go on to say that in Britain Irish and Caribbean people and their British born children have high rates of major mental illnesses. There are now other theories that have come about to indicate proxies for social class like the use of housing tenure and car ownership which have showed similar gradients in health. A key study by Nettleton and Burrows (1998) show how "mortgage debt and insecure home ownership are part of their sense of identity and aspirations, which provide a basis for what Laing (1959) called ontological security" Rogers and Pilgrim (2005:46) this is furthered by him explaining that when mortgages are not met and arrears become a problem then this can have devastating effect on a persons mental health. Class and mental health have a very predictable correlation between each other " the poorer a person is the more likely they are to have a mental health problem" Rogers and Pilgrim (2005:47), but also he talks of how there is a class gradient evident in mental health status across most of the diagnosis is quite even, but when it comes to schizophrenia there is a strong correlation that exist between low social class and the diagnosis of schizophrenia. ...read more.

a less stigmatized neurotic label or a disorder like depression, mania, or manic depression, poor people receive moor biological treatments than psychological treatment. And the reason explained for this is that professionals are middle or upper class and that they cannot relate to lower class they tend to miss diagnose patients as schizophrenia but when it comes to middle class people doctors and patients do relate to each other in backgrounds and personal experiences and so can relate to the patients and understand their life stresses but failing on the poor patients. To conclude I have found that there are various studies relating to social class and schizophrenia most have strengths and weaknesses of several of these have good assessment techniques currently in use and so I conclude that the exclusive use of any single technique will most likely provide a biased or inaccurate assessment of social class and schizophrenia. There is a critical need to empirically investigate the reliability and validity of these needs and assessment strategies. Also there are some that have got to be transformed like more understanding of low SES people by doctors on diagnosing patients. And that some of the studies evaluated could do with more emphasis on patient care and more research done into community care some of the studies have shown good results with employment and poverty alongside social class and some detailed work on gender, race, age, ethnicity, also social drift which shows for and against with rival contradictions overall if I could I would study more studies with more emphasis on details of patients of schizophrenia and try to show more positive aspect of social class and schizophrenia. ...read more.