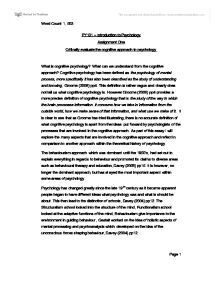 Cognitive psychologists' claim studies of brain damaged patients show a significant amount in regards normal human brains. However there are limitations in this method. The cognitive psychological method is very complex due to patients having considerable differences, but possessing similar brain damage, Eyesneck and Keane (2005). Individuals before the brain damage will have experienced a varied life experience, but will more so experience after the brain damage through the type of rehabilitation, attitude, recovery and support, Eyesneck and Keane (2005) pp9. The computer model is another method which is used within the cognitive approach. This method looked at how simulations of the human cognitive processes were similar to that of computers, Groome (2006) pp375. It is thought that computers provided a new insight into the information processing stages, which provided a correlation with possible brain mechanisms. Experiments cannot provide a definite conclusion that programs and mechanisms operating in a computer are similar to the brain, but we can see a basic possibility of a processing system, Groome (2006) pp8. The computer model has provided much insight into how our brains are similar to computers, however limitations have derived from this method. ...read more.

This illustrated how people were able to attend to one single conversation whilst in the background other conversations are carried out. This showed that people were able to maintain their attention, but they were also able to change their attention if they wished, for example hearing their name or a certain word within a conversation. In conclusion to the cognitive approach within psychology, it is clear to see that the cognitive approach has under gone a lot of changes over the years in regards to what aspects to study in order to fully understand what the approach is about. Many studies have arisen trying to explain how we process information, our cognitive processes and so on. As quoted at the beginning of this essay from Groome (2006) in regards to what cognitive psychology is, it is evident from the research I have done that it is a very broad term and can often lead to different interpretations. The cognitive approach, however has often lead to different applications, for example, it has been very beneficial to those who have dysfunctional thoughts, feelings and behaviours. So I can conclude that cognitive psychology is still an on going approach and therefore does not provide us with a true and clear picture of what actually goes on within our information processing stages. ...read more.