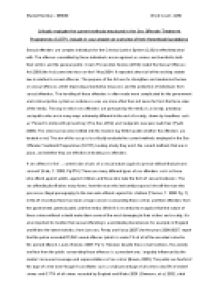 Critically evaluate the current methods employed in the Sex Offender Treatment Programmes (SOTP). Include in your answer an overview of their theoretical foundations

﻿Student Number - 485030 Word Count - 2250 Critically evaluate the current methods employed in the Sex Offender Treatment Programmes (SOTP). Include in your answer an overview of their theoretical foundations Sexual offenders are complex individuals for the Criminal Justice System (CJS) to effectively deal with. The offences committed by these individuals are recognized as serious and harmful to both their victims and the general public. Crown Prosecution Service (2010) stated the Sexual Offences Act 2003 (the Act) came into force on the 1 May 2004. It repealed almost all of the existing statute law in relation to sexual offences. The purpose of the Act was to strengthen and modernise the law on sexual offences, whilst improving preventative measures and the protection of individuals from sexual offenders. The handling of these offenders is often made more complicated for the government and criminal justice system as notorious cases are more often than not never far from the fierce view of the media. The way in which sex offenders are portrayed by the media is as lonely, predatory sociopaths who are in many ways extremely different to the rest of society, shown by headlines such as ?Pervert in motor with girl and boy? (The Sun, 2012) and ?Judge lets new perv walk free? (Pyatt, 2008). This view has become instilled into the modern day British public whether the offenders are treated or not. The aim of this essay is to critically evaluate the current methods employed in the Sex Offender Treatment Programmes (SOTP), looking at why they exist, the current methods that are in place, and whether they are effective at treating sex offenders. ...read more.

It?s important to assess whether sex offenders can actually be treated and reduce sex offending as if they are seen to be effective then it is likely that those sex offenders who have completed the programmes will be released back into the community as they are seen as posing a lower risk to society (Brown, 2005: 151). It is therefore important to see whether the risk of the offender to the general public has in fact been reduced by the programmes, and for as stated by Brown, Deakin & Spencer (2008, Pg 9) informing criminal justice policy developments, in providing appropriate resettlement strategies for sex offenders and in devising the appropriate levels of community based support for sex offenders as they reintegrate into the community in the post-sentence period. There is also often the issue of reconviction rates particularly the official reconviction rates for sex offenders. Like all official statistics that are recorded by the police there is usually a level of criticism surrounding them. This feeling is often being felt by criminologists, the reason for this is that is has long been felt that the official crime statistics published for England and Wales for the most part misjudge the actual level of crime. The non-recorded figure is often referred to as the dark figure of crime, the dark figure of crime unreported to the official agencies has been known since the 1830s (Young, 1991, Pg 37). This figure is often partly gained by victimisation surveys such as the British Crime Survey (BCS), however due to the sensitive nature of sexual crimes; this information is not often given during this type of research. ...read more.