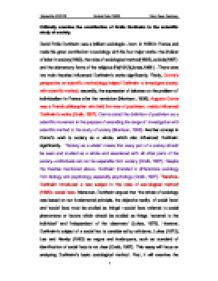 Critically examine the contribution of Emile Durkheim to the scientific study of society.

Critically examine the contribution of Emile Durkheim to the scientific study of society. David Emile Durkheim was a brilliant sociologist , born in 1858 in France and made his great contribution to sociology with his four major works: the division of labor in society(1893), the rules of sociological method(1895), suicide(1897) and the elementary forms of the religious life(1912)(Jones,1986 ). There were two main theories influenced Durkheim's works significantly. Firstly, Comte's perspective on scientific methodology helped Durkheim to investigate society with scientific method; secondly, the expression of debates on the problem of individualism in France after the revolution (Morrison, 1995). Auguste Comte was a French philosopher who held the view of positivism, mainly influenced Durkheim's works (Craib, 1997). Comte stated the definition of positivism as a scientific movement in the purpose of extending the range of investigation with scientific method to the study of society (Morrison, 1995). Another concept in Comet's work is society as a whole, which also influenced Durkheim significantly. 'Society as a whole' means that every part of a society should be seen and studied as a whole and associated with all other parts of the society-individuals can not be separable from society (Craib, 1997). Despite the theories mentioned above, Durkheim intended to differentiate sociology from biology and psychology especially psychology (Craib, 1997). ...read more.

In addition to 'constraint', Lukes (1973) argued that Durkheim extended the concept of constraint too far and claimed that constraint is too narrow as a criterion of social facts to define all the methods that Durkheim used to see the individual affected by social factors. The concept of social facts was examined mainly between distinguishing from sociology and psychology, and relationship between the social and individual. The next two parts will turn to examine the suicide and the division of labor in society. Suicide is Durkheim's third major sociological work published in 1897 (Morrison, 1995).[Microsoft2] Throughout his works, all of those topics are the basic theories for suicide, which seems to be a phenomenon that is associated with the individual and its ramifying functions (Durkheim, 1951). Lukes (1973) stated that Durkheim's suicide was a primary attempt that combined many earlier idea and findings theoretically and systematically, and concerned suicide as a social phenomenon. According to Durkheim (1951), suicide can not be explained by its individual forms. Therefore, the formulation of a social theory of suicide led him to focus on the cause of suicide within the framework of sociology, rather than in the psychological states of individuals (Morrison, 1995). Thus, this was a shift from psychological to sociological examination of suicide. ...read more.

Durkheim turned to seeking how social solidarity varies in different societies and solidarity can be showed in two ways, those are 'mechanical' and 'organic' (Calhoun and Gerteis, 2007). In the mechanical societies, individual is directly connected with society and there are no differences between the individual conscience and the collective conscience (Jones, 1986). That is to say, the relation between individual and society is that individual can not be distinct from the collective as a whole and there is no individual autonomy (Morrison, 1973). In contrast to mechanical solidarity, organic societies shows that labor is specialized in different part of society and individuals connected to each other more than in the mechanical society(Calhoun and Gerteis, 2007). This reveals that individuals turn to rely on each other and become more dependent on specialized economic functions (Morrison, 1973). In conclusion, although Durkheim's social facts are ambiguous in some criteria of characteristics, his contribution of introducing a new subject matter, social facts, into sociology can not be ignored. Moreover, Durkheim maintained that social facts were objective and should be seen as things that were external to individual and independently. Furthermore, he distinguished sociology with psychology that is the matter Comte did not realize. His 'suicide' was the application of social facts and also suicide itself should be considered as a social fact. Therefore, Durkheim's contribution is valuable to sociology and also enriches the social science. ...read more.