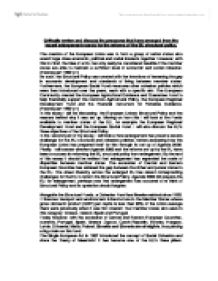 Critically review and discuss the pressures that have emerged from the recent enlargement rounds for the reforms of the EU structural policy.

Critically review and discuss the pressures that have emerged from the recent enlargement rounds for the reforms of the EU structural policy. The creation of the European Union was to form a group of nation states who would forge close economic, political and social interests together. However, with this in mind, the idea of a EU can only really be considered feasible if the member states are able to maintain a sufficient level of economic and social cohesion. (Hannequart:1992:p1) As such, the Structural Policy was created with the intentions of lessening the gap in economic development and standards of living between member states. Furthermore, the European Social Fund measures other cohesion policies which were then introduced over the years, each with a specific aim. The European Community created the European Agricultural Guidance and Guarantee Fund to help financially support the Common Agricultural Policy, the European Regional Development Fund and the Financial Instrument for Fisheries Guidance. (Hannequart:1992:p1) In this essay I will be discussing the European Unions Structural Policy and the reasons behind why it was set up. Moving on from this I will look at the Funds available to member states of the EU, for example the European Regional Development Fund and the European Social Fund. I will also discuss the EU's three objectives of the Structural Policy. In the second part of my essay, I will look at how enlargement has posed a severe challenge for the EU structural and cohesion policies, before assessing how the European Union has prepared itself for this through its set up of Agenda 2000. ...read more.

(Commission of the European Communities:2001:p9). Arnell and Wincott further claim that "if the rate of regional convergence in the applicant countries were to be similar estimated to that across the EU15 over the past decade or so, it would take at least two generations for the increased regional income gap created by enlargement to be halved." (Arnell and Wincott: 2002:p361) This is because it was necessary to assess what the current states economically and socially the new member states of the EU are in and as such, whether the EU27 has differed from the EU15. Not only do the new member states of the EU differ hugely in their economies and social cohesiveness but the EU almost doubled its members, causing huge strains on the budget, not only for pre accession assistance but also to then continue to aid the new member states once having joined the EU. Despite the growth rates in the Central Eastern European Countries being above the EU15 average, economic convergence has been low. The most positive macro economic indications are from Poland, Slovenia, Hungry and the Czech and Slovak Republics, there have still been labour market changes have occurred because of economic restructuring, liberalisation and privatisation. Examples include a decline in industrial employment whilst service sector employment rose. Income levels and the Standard of Living has fallen whilst poverty has spread vastly. Rapid industrialisation, inefficient raw material extraction and a lack of environmental controls have left the environment degraded and pollution levels so high the cost of the clean up is evident. ...read more.

In conclusion, enlargement has expanded the scale of disparities regionally within the EU. The accession of Central and Eastern European Countries has widened the gap between the richer and poorer states in the EU. The sheer diversity politically, economically and socially in the member states across the enlarged EU ha raised corresponding challenges for the EU to reform the Structural Policy. Agenda 2000, although not a brilliant success did prepare, up to a certain extent the EU for enlargement and the EU was more prepared for the accession of member states as a result, perhaps now that enlargement has occurred a re think of Structural Policy and its operation should happen. Arnull, Anthony and Wincott Daniel 2002 "Accountability and Legitimacy in the European Union" Oxford University Press Begg Iain 1999 "EU Investment Grants Review" Published by World Bank Publications Commission of the European Communities 2001 "Unitary, Solidarity and Diversity for Europe, its people and its territory. " Second Report, Volume 1 Europa website www.europa.co.uk Date accesed 10th March 2009 European Commission annual report 2002 "The Instrument for Structural Policy for Pre-Accession (ISPA) ." Published by Official Publications of the European Communities, Garc�a, Jorge. Clayton, Jess. Hobley, Christopher 2004 "The student's guide to European integration: for students, by students" Blackwell Hooghe, Liesbet 1996 "Cohesion policy and European integration: building multi-level governance." Oxford University Press Henderson, Karen 1999 "Back to Europe: Central and Eastern Europe and the European Union" Routledge Publishings. Hannequart Achille 1992 "Economic and Social Cohesion in Europe: A New Objective for Integration" Routledge Warleigh, Alex 2003 "Democracy and the European Union: Theory, Practice and Reform" SAGE ...read more.