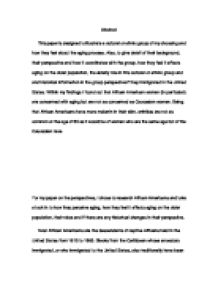 Cultural Aging. This paper is designed to illustrate a cultural or ethnic group of my choosing and how they feel about the aging process.

Abstract This paper is designed to illustrate a cultural or ethnic group of my choosing and how they feel about the aging process. Also, to give detail of their background, their perspective and how it coordinates with the group, how they feel it effects aging on the older population, the elderly role in this cultural or ethnic group and and historical information in the group perspective if they immigrated in the United States. Within my findings I found out that African American woman (in particular) are concerned with aging but are not as concerned as Caucasian women. Being that African Americans have more melanin in their skin, wrinkles are not as common at the age of 65 as it would be of women who are the same age but of the Caucasian race. For my paper on the perspectives, I chose to research African Americans and take a look in to how they perceive aging, how they feel it effects aging on the older population, their roles and if there are any historical changes in their perspective. ...read more.

Of course, there are women of different ethnic groups, which by way of sending a message that all women, no matter ethnicity are concerned with aging. For the most part, it seems that Caucasian women (more so than black women) are concerned about the aging process. To aid in my point, I'll use the statistics from the Society of Plastic Surgeons that proves that African Americans are still one of the smaller groups requesting plastic surgery. Whites account for 69% while blacks have only 8%. There is a very popular phrase within the African American community affirming that "black don't crack". This phrase is an exact implication that African Americans typically look younger in age versus other ethnic groups, mainly the white ethnic group. A person's physical health, one's lifestyle and health definitely play a role in this. It is usually quite common for people to mistake a black women who may be 65 and be mistaken for 55 and for women in their 40's to be mistaken as being in their 30's (Yeo, 2001). ...read more.

If this birth cycle (or similar variations of it) continues, then the mother will be able to call herself "Grandma" before she even reaches the age of 50. Although, black women who become grandmothers rather early very often feel less inclined to be concerned with aging; because they have already completed a life cycle that others take many years to establish. It could be said that as stigma of young motherhood becomes more irrelevant, so do the women's concerns about growing old. The elderly are treated with high regard and respect in the African American community. Those women who enter this "elder" phase of life early (25 to 38 years old) feel the pressure of role conflict and tension in the social support they receive(Dorthy, 2004). They perceive grand parenthood as a "tenuous" role. Those who enter grand parenthood "on time" (42 to 57 years old) have less conflict but can also feel the pressure of integrating family and occupational roles(Ada, 1998). Women in this age usually occupy a traditional family role, that "lofty" and respected position of a grandmother. She is also the nurturer and disciplinarian of children, the family historian, the hub of the family network in which decisions are made, and the convener of family events. ...read more.

This essay aimed to discuss the African-American perspective on aging. There was an introduction outlining what would be covered but the ideas were not expressed clearly, resulting in readers being confused. I did not note a discussion regarding historical changes in attitudes towards aging.
There were some generalisations made, and comments which were not substantiated. Avoid this by including supporting references where appropriate. Make sure the work finishes with a brief conclusion, reminding the reader of what has been covered.
There were a few grammatical errors which could be minimised by careful proof-reading.
3/5