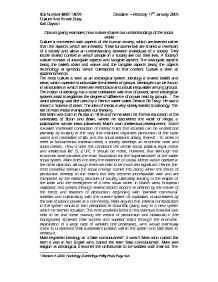 Culture is concerned with aspects of the human society, which are learned rather than the aspects, which are inherited. These fundamentals are shared in members of a society and allow an understanding between individuals of a society. They locate share...

Culture is concerned with aspects of the human society, which are learned rather than the aspects, which are inherited. These fundamentals are shared in members of a society and allow an understanding between individuals of a society. They locate shared context in which people in a society live out their lives. A society's culture consists of intangible aspects and tangible aspects. The intangible aspects being the beliefs, ideas and values and the tangible aspects being the objects technology or symbols, which correspond to that content. Culture is seen as epiphenomenon. The mass culture is seen as an ideological system. Ideology is shared beliefs and ideas, which operate to rationalize the interests of groups. Ideologies can be found in all societies in which there are methodical and inbuilt inequalities among groups. The notion of ideology has a close correlation with that of power, since ideological systems assist to legitimise the degree of difference of power held by groups. 1 The word ideology was first used by a French writer called Destutt De Tracy. He said it meant a 'science of ideas'. The idea of media is very closely related to ideology. The rise of mass media manipulates our thinking. Karl Marx was born in Prussia in 1818 and he received his formal education at the universities of Bonn and Berlin, where he discovered the work of Hegel, a philosopher whose ideas influenced Marx's own intellectual development. ...read more.

The equation that Arnold draws between Americanisation and mass democracy rather than Americanisation and mass culture. However many have suggested that democratisation and mass culture are not that easily distinguished from each other. Leavis was a critic of mass society and mass culture and saw America as an embodiment of both of these dangers. He saw mass society as involving mass production and standardisation generating an almost irrepressible shift to a mass culture dominated by the mass media. This involved the hypnotic pleasures of a superficial culture and the exploitation of a ruthless and uneducated public, which consequently became indifferent to the standard of great Art. Americanisation was therefore the problem for Leavis because American society had the most developed mass culture and thus represented the future towards which other comparable societies such as Britain were heading. 'American conditions are the conditions of modern civilisation even if the drift has gone further on the other side of the Atlantic than on this'. The criticisms that can be made of this particular understanding of Americanisation can be used to introduce a more general critique of mass culture theory. There are other ways of understanding ways of Americanisation in Britain. The debate over the nature and effects of Americanisation in Britain can be traced back to the nineteenth century. But it seems to have become more significant and more contentious after 1945. ...read more.

Ideology can be seen as a critique because it can lead to false assumptions. An example of this may be men control power, higher earnings, and higher status. To justify these statements arguments are given out which are seen as lies such as women are weaker than men are less rational etc. Overall I think that culture shapes our understandings of the social world in many ways. However all societies don't all have the same thoughts about the social world. Also having different religions may also influence a person's understandings of the social world. History of a society can have an impact of a persons understanding of the social world. For example football in the UK has always been seen as part of our culture whereas a country like Ethiopia may never seen football as important factor of their culture. The Media is part of our culture in the UK and the media manipulates our thoughts. Another factor may be clothes. In the UK it is traditional clothes may be seen as a pair of jeans and a top whereas in Bangladesh their traditional clothing is saris. Culture plays a big role in our lives and helps us understand the social world in different ways according to our cultures and religions even. This is because we focus a lot on traditions passed on from generation to generation. ...read more.