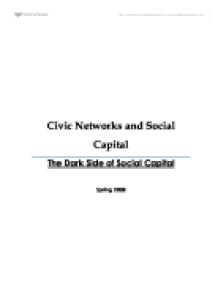 Dark Side of Social Capital

Furthermore, inside a closed group, one's dissent from the general will may have repercussions for the member. Support for some members of an organization (close friends or family) can put pressure on a member. Extending to the business level, support for members of the group can lead to a scarcity in resources. Therefore, a misuse of social capital can somehow restrict freedom and put constraints on a group's members. Consequently, misusing social capital generates its dark side which has repercussions for the society, as we will see in the following paragraph. The negative effects of social capital on civil society As Adler and Kwon (2000) state "social capital sometimes can be profoundly dysfunctional and counter-productive" (p.106). However, how much does the dark side of social capital affect civil society and how its effects can be measured are some questions on which not many scholars harped. An interesting research is provided by Gabbay and Zuckerman (1998), who "demonstrate that corporate research and development (R&D) scientists generally have greater expectations of future mobility when their work relations exhibit low contact density" (p.191). They claim that in organizations where a high flow of information is needed, if more "brokerage" is involved, innovation and creativity will be chained. To prove their hypothesis, they first rely on three theoretical frameworks-contingency and resource dependency theory, technological information communication and structural holes theory. Practically, scientific researchers in 223 R&D laboratories of 29 major American corporations in 8 industries are subjected to a survey conducted in 1985-1986. The survey pointed out features about the scientists' "experiences and orientation to work". ...read more.

When testing their hypotheses, the authors encountered measurement problems which were an impediment in coming to a clear and concise answer. Concerning negative effects of networks, "models of the four criminal outcomes suggest relatively weak main [...] effects [...] when considered without a control for social cohesion"(p. 46). However, the only positive effect of networks highlights their twofold function in "inhibiting and facilitating neighborhood crime" (p.46). By taking into account these three different models I tried to emphasize the practical approach concerning the dark side of social capital and the way it affects the society. It is clear to me that there is a negative part of social capital shaped by the misuse of its functions and components. Nonetheless, I could not provide clear measurements to show an important negative effect of these backwards such that they hinder the general beneficial nature of social capital. Conclusion The aim of this essay was to answer the question: "In which measure does the dark side of social capital affect civil society?" In order to come to a response, I started with discussing various definitions of social capital, showing the complexity of the concept. Further on, I focused on the downsides of social capital. I touched upon the misuse of its functions which can turn networks, trust, cooperation and reciprocity into backwards. In the following paragraph I tried to support my research question with three researches conducted by Gabbay and Zuckerman (1998), Baker & Faulkner (1993) and Browning, Dietz and Feinberg (2000). In the end, I could not show a negative impact of these downwards that can hamper society's development. Although I did not have a positive answer to my question, this does not mean that the dark side of this concept can be omitted. ...read more.