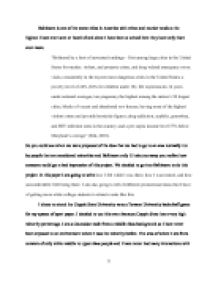 Deprived Areas of Baltimore. I chose to attend the Coppin State University versus Towson University basketball game for my spaces of sport paper. I decided to use this event because Coppin State has a very high minority percentage. I am a Caucasian male

Baltimore is one of the worst cities in America with crime and murder totals at the highest I have ever seen or heard of and since I have been at school here they have only risen even more. "Bolstered by a host of unwanted rankings-first among large cities in the United States for murder, violent, and property crime, and drug-related emergency room visits; consistently in the top-ten most dangerous cities in the United States; a poverty level of 24% (34% for children under 18); life expectancies 14 years under national averages; ten pregnancy the highest among the nation's 50 largest cities; blocks of vacant and abandoned row houses; having some of the highest violent crime and juvenile homicide figures; drug-addiction, syphilis, gonorrhea, and HIV infection rates in the country; and a per capita income level 57% below Maryland's average" (Silk, 2010). So you could see when we were proposed of the idea that we had to go to an area normally run by people that are considered minorities and Baltimore only 15 minutes away you realize how someone could get a bad impression of this project. We decided to go into Baltimore to do this project. In this paper I am going to write how I felt while I was there, how I was treated, and how uncomfortable I felt being there. I am also going to tell of different promotional ideas that I have of getting more white college students to attend events like this. ...read more.

We did not know how to handle being in an area this poor with not much good around and many of these people that we saw on the streets looked like they were just getting by. Being at the game didn't feel as uncomfortable as going in did. For basketball games here at Towson University all you have to do is either go swipe your student id or buy your tickets and go and find your seat but at Coppin State they have cops at the doors that pat you down to make sure you have weapons of no kinds. I felt sort of scared because it then made me realize how bad of an area we were in. I have never been patted down before entering a college basketball game especially one of low importance like this. Towson versus Coppin State is not a big draw where there would be people of major importance they would be keeping safe. This meant that they have had issues with weapons there before and maybe a chance someone at the game had the opportunity to get one in somehow. This display of security should make you feel secure that they have cops here doing this but it actually made me feel less secure especially since it was around the type of people I do not normally associate myself with on a usual basis. Throughout the game I started to feel more comfortable but you could still feel like other people were staring at us and talking to their friends about why we were at the game. ...read more.

Being in the fan development department here at Towson University for the semester has given me knowledge in promotions and increasing fan attendance and while a good product on the field or court is the best way to bring crowds in often a good giveaway like an iPod also will bring in white college students even to an area like Coppin State University. To conclude my paper I felt like this experience was definitely eye opening for me. This was a lot of exposure for me to a kind of people that I have never interacted with before and spent this much time with. The whole process of getting to the game was the worst and most uncomfortable part as I really felt unwanted and at times unsafe by the residents of the area. It gave me the perspective of what minorities go through in areas of where I'm from where they are looked at differently. As the night went on I was getting more settled in and I think people started to watch the game so it took less attention off us but at times I saw different people staring at us. There were other white people at the game too but I still felt out of place but was feeling slightly more comfortable as the game went on. I don't think that I would come down to a game here anytime soon or possibly ever at all but I do think that if the promotional ideas I have proposed before would do a great job of bringing other white college students to the game. ...read more.