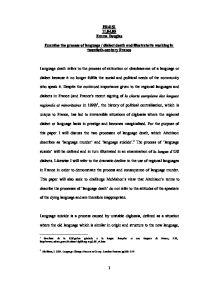 FR4151 11.04.05 Emma Douglas Examine the process of language / dialect death and illustrate its working in twentieth-century France Language death refers to the process of extinction or obsolescence of a language or dialect because it no longer fulfils the social and political needs of the community who speak it. Despite the continued importance given to the regional languages and dialects in France (and France's recent signing of la charte europ�ene des langues regionale et minoritaires in 1999)1, the history of political centralisation, which is unique to France, has led to irreversible situations of diglossia where the regional dialect or language lacks in prestige and becomes marginalised. For the purpose of this paper I will discuss the two processes of language death, which Aitchison describes as 'language murder' and 'language suicide'.2 The process of 'language suicide' will be defined and in turn illustrated in an examination of la langue d'O�l dialects. Likewise I will refer to the dramatic decline in the use of regional languages in France in order to demonstrate the process and consequence of language murder. This paper will also seek to challenge McMahon's view that Aitchison's terms to describe the processes of 'language death' do not refer to the attitudes of the speakers of the dying language and are therefore inappropriate. Language suicide is a process caused by unstable diglossia, defined as a situation where the old language which is similar in origin and structure to the new language, gradually merges with the dominant language until it is no longer identifiable. ...read more.

These dialects are linked by a chain of mutual intelligibility. The similarity of the origin of the dialects and the consequent continuum ensure that there is no linguistic barrier to prevent them from being absorbed into the dominant language. Furthermore, the northern dialects are enclosed and isolated and receive no support from linguistic neighbours (as is the case of Dutch for Flemish and German for Alsatian). Aitchison would view these dialects as committing 'an act of suicide'. But from the perspective of the speakers' attitudes, is this in fact the case? Arguably, contrary to McMahon's opinion, the speakers' attitudes do play a role in the demise of a dialect. Although speakers often change their speech habits subconsciously, there is a stigma attached to patois as being le mauvais fran�ais and speakers deliberately adopt more 'prestigious' styles of pronunciation. 'Les locuteurs cherchent, dans une certaine mesure, � d�pouiller leur langage de ce qu'ils resent comme des indices d'appartenance � des groupes sociaux peu valoris�s.' 8 The term, 'language suicide' is therefore an appropriate one because the speakers themselves play a role in killing the language. Language murder is the process caused by a situation of unstable diglossia, where the old language, which is not similar in origin or structure to the new language, is simply ousted by a new more prestigious language. Nancy Dorian, to whom the study of language death owes its name, was the first to observe this phenomenon in her ...read more.

The regional languages in France are therefore in the process of being 'murdered' by Standard French. With regard to the attitudes of the speakers, speakers do not voluntarily abandon their regional language although there is a marked reluctance to use the language because of the increased limitations of its usage. Contrary to McMahon's view, the speakers of regional languages are therefore, in some cases, playing a role in 'murdering' their regional dialect in favour of Standard French. Consequently, Aitchison's term 'language murder', in making reference to this, is not necessarily an unsuitable one. To conclude, it is evident that the regional languages and dialects of France are currently undergoing a gradual process of language death caused by the promotion of Standard French. 'Language suicide' is presently happening amongst la langue d'O�l dialects which are experiencing a dialect continuum and converging with Standard French. 'Language murder' can be observed in the six regional languages in France. These dialects are becoming increasingly obsolete. Contrary to McMahon's criticism of Aitchison, language suicide and language death can refer to the speakers' attitudes. Speakers can consciously climb a dialect hierarchy or show reluctance in using their regional language. In this respect there is no danger of misinterpretation. The situation of diglossia in France is irreversible. Attempts to standardise regional variants goes against regionalism itself by ignoring the importance of other dialects within that region. ...read more.