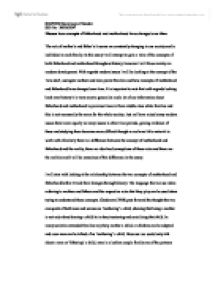 Discuss how concepts of fatherhood and motherhood have changed over time

Discuss how concepts of fatherhood and motherhood have changed over time The role of mother's and father's it seems are constantly changing in our society and is individual to each family. In this essay I will attempt to gain a view of the concepts of both fatherhood and motherhood throughout history, however I will focus mainly on modern development. With regards modern issues I will be looking at the concept of the 'new dad', surrogate mothers and lone parent families and how concepts of motherhood and fatherhood have changed over time. It is important to note that with regards looking back over history it is very easy to generalize and a lot of our information about fatherhood and motherhood in previous times is from middle class white families and this is not necessarily the norm for the whole society. Just as I have raised many modern issues there were equally as many issues in other time periods, gaining evidence of these and studying them becomes more difficult though as we have little material to work with. Similarly there is a difference between the concept of motherhood and fatherhood and the reality, there are idealized conceptions of these roles and there are the realities and I will be conscious of this difference in the essay. I will start with looking at the relationship between the two concepts of motherhood and fatherhood before I track their changes through history. The language that we use when referring to mothers and fathers and the respective roles that they play can be used when trying to understand these concepts. ...read more.

The introduction of schools and external childcare solutions began to revolutionize motherhood. With more time available to them and the role of educating their children slipping away from them women turned to the public sphere to occupy themselves. Also as medicine and living conditions improved infant mortality rate fell and women began to have fewer children. However it is really the event of two world wars, which leads to the most dramatical change in the role of women and therefore the concept of both fatherhood and motherhood. Women were needed to work while men went away to fight in both world wars. The world wars also left many women widowed and children fatherless due to the sheer number of deaths. There was a significant lack of men of a certain age group due to the wars and many women now had to provide for their families, so going to work was inevitable. In the 20th Century there were many issues with effected and revolutionized the concept of parenthood. Most notably there is the rise in women's rights and feminism, women were given the right to vote in 1918 and gradually gained access to all areas of work and education. The role of the traditional family began to deviate with the ease of divorce and the consequential decline in marriage. In 1923 women were allowed to use the same terms as men for divorce and in 1969 'irretrievable' breakdown was introduced as a term for divorce, this meant that whilst in 1961 there were 27,224 divorces the figure doubled in 1969 to 55,556 cases of divorce, and then again by 1972 to 124,556 (National Statistics [online]). ...read more.

Although in society all lone parents are demonized as being a drain on state resources and morally wrong in many cases for both parent and child, despite the negative aspects, it can be better for them to be lone parent family. Shaw (1991) states from her studies that "Most women do maintain that there is still a stigma attached to the label of 'lone parent'" (1991, 155) however they do consider that this is the best option and are wary of remarrying to form the traditional family unit. The concepts of motherhood and fatherhood are such vast subjects that it would be impossible for me to consider the subject at any other than a brief level. However I feel I have explored some of the issues from time and some modern issues surrounding the concepts and tried to display the varying forms of parenthood. We each come to this issue though with out own emotional baggage from our own families making it that much harder a subject to consider objectively. Therefore it is also difficult to come to any definitive conclusion about the developments of motherhood and fatherhood and why these have taken place. Family and the concepts of parenthood are very subjective issues and vary over not just time, but class, race, location and age and they are constantly changing. Religion and government might try to tell us what is the right way to parent but as we can see from many of the cases mentioned here there is no right way but that there is a need by society to recreate no matter what the means or consequences. ...read more.