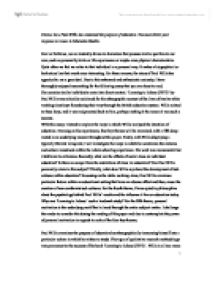 Discuss how Paul Willis has examined the purpose of education in Learning to Labour (1977). You must direct your response to issues in Education Studies.

Discuss how Paul Willis has examined the purpose of education. You must direct your response to issues in Education Studies. Real or fictitious, we are instantly drawn to characters that possess similar qualities to our own, such as personality traits or life experiences or maybe even physical characteristics. Quite often we feel we relate to that individual in a personal way. It makes a biographical or back story line that much more interesting. For these reasons, the story of Paul Willis has appealed to me a great deal. Due to this enhanced and enthusiastic curiosity, I have thoroughly enjoyed researching for the following essay that you are about to read. On occasion similar individuals come into direct contact. 'Learning to Labour (1977)' by Paul Willis was critically acclaimed for his ethnographic account of the lives of twelve white working class boys floundering their way through the British education system. Willis related to these boys, and it was reciprocated back to him, perhaps making it the reason it was such a success. With this essay, I intend to explore the ways in which Willis analysed the intention of education. Drawing on his experiences, four key themes will be examined, with a fifth deep-rooted in an underlying manner throughout this paper. Firstly, with Willis displaying a typically Marxist viewpoint, I will investigate the ways in which he scrutinizes the cultures and cultural constructs within the whole schooling experience. His work was monumental but it did have its criticisms. Secondly, what are the effects of social class on individual education? Is there an escape from the restrictions of class via education? Can Paul Willis personally relate to this subject? Thirdly, what does Willis say about the development of sub-cultures within education? Focussing on the white working-class, Paul Willis examines particular factors within an educational setting that have an adverse effect and thus, cause the creation of non-conformist sub-cultures. ...read more.

Armaline & Farber (2000) consider this in their article 'Reconsiderations': 'this 'penetration' into the ideology of schooling efficacy and the deep structure of socio-economic functioning was not so much a conscious insight as a lived experience, a felt, sensed experience reinforced by working-class culture in general and family and neighbourhood life in particular (p.164)'. Further on in their writing, Armaline & Farber display an objective of rectifying the role of the schooling system applying, even somewhat manipulating, the teachings of Paul Willis to their advantage: 'We think the messages of Willis and Weis can be used to conceptualize reform beyond mere reintegration of students into an objectifying and dehumanizing social enterprise devoid of social vision rooted in the concern for participatory political and economic democracy. We also believe it is our responsibility as educators and citizens to engage in this reform debate by infusing the insights of the likes of Willis and Weis not only into our own writing and teaching, but also into the broader public discourse (p.167)'. On the other hand, they do note that Paul Willis is concerned with the role of the teacher within the educational context of social relationships and delivery of information: 'Willis saw the authority of the teacher based on an exchange, a trade-off of official knowledge for respect, guidance of control (Willis, 63-64). Within that exchange, the teacher (any teacher) was seen to occupy a higher position due to superior knowledge and held the key to a series of other exchanges in which the student was supposed to take part (p.163)'. To venture a guess, Paul Willis may have come across some exceptional teachers in his rise through the educational ranks. What does Paul Willis say about the development of sub-cultures due to education? Focussing on the white working-class, Willis examines particular factors within an educational setting that carry an adverse effect and thus, cause the creation of non-conformist sub-cultures, represented by his term, the 'counter-culture'. ...read more.

in plans to attend higher education. Willis believes that personal motivation needs to be encouraged, even raised from the individual by influences from within the social and cultural world. After all, he irrefutably targets the social relations and connections of the 'counter-culture' and the member's peer groups, which are proved by the conclusion of Collier et al: 'In addition to having appropriate educational qualifications for university entry, the profile of a 'typical' potential working-class participant would be a young person who believes he/she has the ability to pass a degree and is prepared to postpone earning money to go to university. They are likely to have received considerable encouragement, especially from their families (p.259)'. 'The models imply that an effective strategy for widening participation in higher education may require rather more than increasing the number of available degree places for suitably qualified candidates. It points to the importance of earlier formative experiences, primarily in educational contexts but also within the family, in developing self-belief in one's capacities and abilities, positive attitudes towards education and studying, and the fostering and encouragement of personal motivation to continue in education (Collier et al, 2003, p.260)'. Just like the 'lads', I identified with Paul Willis. I hail from a similar background and upbringing and share many of his beliefs. Seeking to become a school teacher myself, I had a personal curiosity into the insights of Willis towards the subject matter displayed throughout the themes discussed in this essay. The themes of structure and institution, social class and the creation of sub-groups, all within the framework of Education Studies, link cohesively with the work and influence of Paul Willis. During the introduction, I challenged you, the reader to consider personal motivation throughout the key themes. By doing this, did it change your perspective at all? A high degree of personal motivation allows for an individual to conquer any hurdles they face in the achievement of their objectives. Paul Willis displayed a great deal of personal motivation to reach his goals. Can you now relate to his optimistic view of education? Word Count: 3154. ...read more.