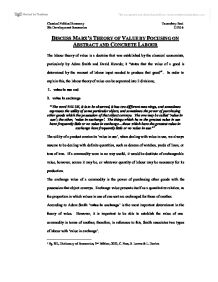 Discuss Marx's Theory of Value by Focusing on Abstract and Concrete Labour.

DISCUSS MARX'S THEORY OF VALUE BY FOCUSING ON ABSTRACT AND CONCRETE LABOUR The labour theory of value is a doctrine that was established by the classical economists, particularly by Adam Smith and David Ricardo; it "states that the value of a good is determined by the amount of labour input needed to produce that good"1. In order to explain this, the labour theory of value can be separated into 2 divisions; 1. value in use and 2. value in exchange "The word VALUE, it is to be observed, it has two different meanings, and sometimes expresses the utility of some particular object, and sometimes the power of purchasing other goods which the possession of that object conveys. The one may be called 'value in use'; the other, 'value in exchange'. The things which have the greatest value in use have frequently little or no value in exchange...those which have the greatest value in exchange have frequently little or no value in use."2 The utility of a product creates its 'value in use', when dealing with value in use, we always assume to be dealing with definite quantities, such as dozens of watches, yards of linen, or tons of iron. If a commodity were in no way useful, it would be destitute of exchangeable value, however, scarce it may be, or whatever quantity of labour may be necessary for its production. The exchange value of a commodity is the power of purchasing other goods with the possession that object conveys. Exchange value presents itself as a quantitative relation, as the proportion in which values in use of one sort are exchanged for those of another. According to Adam Smith 'value in exchange' is the most important determinant in the theory of value. However, it is important to be able to establish the value of one commodity in terms of another; therefore, in reference to this, Smith associates two types of labour with 'value in exchange'. ...read more.

Abstract labour is a type of labour that is common to all commodities, including those commodities producing using concrete labour, as a measure of the time gone into production. However, it is difficult to 'pin-point' exactly what abstract labour is, it doesn't exist to the human eye, but it is still recognised. Marx states that it is abstract labour that creates the value of a product; it represents the human activity undertaken during production. Labour is also defined as labour as expenditure under average conditions of a quantity of average labour-power. In earlier writings, Marx uses the term 'universal social labour' instead of abstract labour; his argument is that in a commodity society labour becomes social labour only as abstract labour. Average social labour-time is the only social substance common to commodities, which can be the basis of social relations equating them as more or less the same thing. "The value of a commodity represents human labour in the abstract, the expenditure of human labour in general. And just as in society, a general or a banker plays a great part, but a mere man, on the other hand, a very shabby part, so here with mere human labour. It is the expenditure of simple labour power, i.e. of the labour power which, on an average, apart from any special development, exists in the organism of every ordinary individual."4 Marx uses the following example to explain abstract labour further, in relation to the theory of relative price; If the time taken to produce one chair is 2 hrs and the time to produce one table is 4 hrs, in 4 hrs either one table or two chairs can be produced, =. This is what Marx describes as the theory of relative price; and it is this relative price, that instigates interest amongst economists. As suggested by Marx the theory of relative price and exchange value are the results of abstract labour. ...read more.

Marx seemed to think that abstract labour time is a common substance in all commodities, while denying that prices tended to be proportional to labour values. The labour theory of value applies to all commodities produced and sold in capitalist societies. Commodities have both use values and exchange values. Value, according to Marx, is abstract labour time. The accumulation of exchange values as an end in itself distinguishes capitalism from simple commodity production. Marx's approach to value was essentially Ricardo's labour theory of value. According to Marx, the values of "All commodities are only definite masses of congealed labour time." As an advocate of Ricardo's original theory, he also followed and built on his solutions to the labour value theory's innate deficiencies. Although Marx used the classical concepts of value he applied his broad philosophical and sociological knowledge, to reach conclusions in 'Capital' that diverged radically from them. Like Aristotle, exchange of value or more appropriately exchange of 'just' value had for Marx, moral and judicial implications as well as economic ones. The labour theory of value is a fundamental component of the economic and social theories of Marx and of his analysis of capitalist exploitation. Marx argues that the value of any commodity is determined by the socially necessary labour time that goes into its production. Marx uses the term 'socially necessary labour time' because the labour time required to create a commodity depends on the society's levels of technology and craft. In Marx's theory, commodities should in principle be exchanged in the market place for prices that exactly correspond to the necessary labour time embodied in them. When a commodity is exchanged- or sold - for more than its labour value, a surplus value is realized. This theory of value provides the foundation of Marx's claim that labour is exploited in a capitalist society: the capitalist, through the power of capital ownership, is able to pay the worker less than the market value of the commodities produced and the surplus value is captured by capital and largely re-invested to increase the means of production. ...read more.