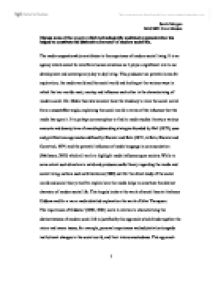 Discuss some of the ways in which technologically mediated communication has helped to constitute the distinctive character of modern social life.

Discuss some of the ways in which technologically mediated communication has helped to constitute the distinctive character of modern social life. The media unquestionably contributes to the experience of modern social living. It is an agency which cannot be void from human existence as it plays a significant role in our development and contemporary day to day living. This produces two potential areas for exploration; the media world and the social world and looking at the various ways in which the two worlds meet, overlap and influence each other in the characterizing of modern social life. Media theorists however have the tendency to view the social world from a cause/effect angle, explaining the social world in terms of the influence that the media has upon it. It is perhaps commonplace to find in media studies literature various accounts and descriptions of encoding/decoding strategies founded by Hall (1973), uses and gratifications approaches defined by Blumler and Katz (1974, in Katz, Blumler and Gurevitch, 1974) and the potential influence of media language in communication (Matheson, 2005) which all work to highlight media influence upon society. While to some extent such direction is valid and produces useful theory regarding the media and social living, authors such as Silverstone (1999) call for the direct study of the social world and social theory itself to explain how the media helps to constitute the distinct character of modern social life. This largely looks at the work of social theorist Anthony Giddens and for a more media detailed explanation the work of John Thompson. The importance of Giddens' (1990; 1991) work in relation to characterizing the distinctiveness of modern social life is justified by his approach which binds together the micro and macro issues, for example, personal experiences and subjectivity alongside institutional changes in the social world, and their interconnectedness. This approach allows for the prospect of looking at the media in a broader social context and understanding the media in relation to other institutions and practices. ...read more.

and simultaneity (Thompson, 1995) which then featured, and continue to feature as an element attributed to social interaction in the 21st Century within new communication technologies. To these early forms of communication media, Giddens' (1990:21) concept of disembedding can be applied as it explains how interactions were 'lifted out' of local context and restructured across time and space. Similarly, Giddens' (1990) ideas of trust and risk can be applied. In applying Giddens' (1990) definition of expert systems, the printing press for example, would have been one of the first media expert systems in the beginnings of modernity. Here, individuals would place trust in such an expert system by making a faceless commitment to the producers of a given print material as there would be an issue of risk involved that the information printed would not be reliable or credible. This is a concept which would still be applicable with today's printing press, however, as modern day print material often has an allegiance with a political party and a specific ideology in production, this would possibly cause distrust in certain individuals of any print material whose ideology and political views are not akin to their own. Subsequent to the development of the printing press as a large media expert system was the introduction and development of television and radio. According to Thompson's (1995) typology such institutions allow again for mediated interactions, mediated quasi-interactions, to a lesser extent face-to-face interactions within the domestic sphere or a mixture of interactions in the social world. The technology of the television, Silverstone (1994) suggests, has allowed for the distribution of programmes on a global scale. With more recent developments of the internet, the same could be said for radio programmes. Not only are radio stations able to be accessed by those across specific geographical areas who can access the bandwidth of a particular station, but with the use of the internet individuals can now log onto websites and receive live streaming of radio programmes on their personal computers. ...read more.