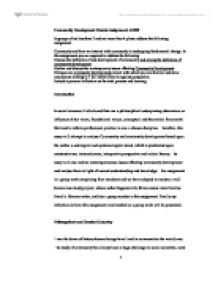 Community Development Module Assignment AD509 In groups of not less than 2 and not more than 4 please address the following assignment: Community and how we interact with community is undergoing fundamental change. In this assignment you are required to address the following: Discuss the definition of and development of community and arising the definition of community development Outline and discuss the contemporary issues affecting Community Development Critique one community development project with which you are familiar and draw conclusions relating to 1 & 2 above from an applied perspective. Include a personal reflection on the task, process and learning. Introduction In social sciences it is believed that one's philosophical underpinning determines or influences h/her views, foundational values, conceptual and theoretical framework that tend to inform professional practice in one's chosen discipline. Therefore, this essay will attempt to analyse Community and community development based upon the author's ontological and epistemological stand, which is predicated upon constructivism, interactionism, interpretive perspective and critical theory. The essay will also outline contemporaneous issues affecting community development and analyse them in light of current understanding and knowledge. This assignment is a group work comprising four members and we have adopted to analyse a well-known case study project, whose author happens to be fellow course-mate Caroline Farrell a librarian/writer, and also a group member in this assignment. Finally my reflection on how this assignment was handled as a group work will be presented. Philosophical and Classical Underlay Since the dawn of history human beings have lived in communities the world over. The study of community has always been a huge challenge to social scientists, most especially with the kind of change that characterise modernity. The advent of modern philosophy, which began with Rene Descartes' (1596-1650) mind/body (rational/emotional) split was linked to the enlightenment, modernisation, industrialisation, modernity, and then technoscience, and thus, established a new world order, which many contend has eroded "social capital", traditional authority, solidarity and weakened communal bonds, local ties/links and threatens survival (Putman, 2000) ...read more.

(6) The influence of the state and the EU assistances and policies, and also global politics, all affect indigenous communities in both good and bad ways. Contemporary issues influence both the individual and community at large creating unprecedented ambiguity and complexity thus, demanding a specialised approach to contemporary community development. My observation is that most community development programmes in Ireland are fictitious, illegitimately co-opted, and corrupted. There is also this myth that everybody is doing fine or that the welfare and other social agencies are there to assist the needy. The question is why still exist much poverty and disadvantages in Ireland? Breen, et al's (1990) study suggest a grave inherently rooted inequality in Irish society, which has remained unchanged amidst economic boom and countless high profile projects geared towards addressing this issue. They lamented that, the families that enjoyed privileged positions in the old class structure secured comparable positions in the new one. Those families at the bottom of the old class hierarchy have, if anything, drifted downward into a new underclass, dependent on suite income maintenance for their livelihood. It is deplorable and lamentable that, years of religious moralism and subsequent viable economic blessings have not addressed dramatically the deeply rooted causes of poverty in modern Ireland instead, the new fad became the culture of consumerism. Veblen's writing is very much alive in our today's Ireland, which many suggest pride itself or camouflage under the culture of consumerism, and thus, attempt to masquerade the poor among her who are equally infested with this contagious social dilemma, which Veblen (2006) called "invidious" and "conspicuous" consumption. Kellagher and Whelan (1992) noted that, Many families are experiencing second generation unemployment, and the likelihood is that many of the young adults of these families will never work. For the most part, however, the poor remain hidden. The Community Development While there are many definitions of community development, the core concept for this analysis is one of collective action for social change, with an emphasis on empowerment and participation, and focus on process as well as outcomes (Combat Poverty 2006). ...read more.

the assignment but to my greatest surprise Caroline was the first to object and then supported and seconded by Jo - insisting that it was meant and supposed to be written individually. I tried to press further for them to reconsider and also think of the various benefits in such group work, which always outweighs the associated difficulties of working as a group for the first time. Still they were not ready and then Margaret who had been quiet now stepped in and clarified the air pointing that it seemed obvious members preferred to go by individual written assignments, and thus, I was persuaded. The next time the group met Jo suggested using Kenny's project cycle to critique the project, which guided us on questioning Caroline's project, which was convincingly defended. We did not meet again to discuss vividly contemporaneous issues or even how individually we view community or community development. I did not press much for that because when we were commenting on individual definitions, Caroline commented on mine containing too much vocabulary and could give somebody headache and dizziness and that I should attempt to be writing in a very simple language. I honestly defended my reasons for attempting to write academically (lots of vocabulary/terminology). Such comments made me more eager to work with them in team writing and editing, with intent possibly I could learn something very, very useful about writing, but unfortunately and regrettably it never happened. Therefore, I made up my mind to do my community assignment according to my own view except using the project adopted by the group, which I am highly proud of because its author is my course-mate. Other than that, I could have opted for another project that would suit my ontological and epistemological stand. It was ironical and unfortunate that we are doing community assignment, which warrants that we work with collective inputs of potentialities, abilities and possible growth of communal spirit, empowerment and transformative learning as participants in adult and community education. ...read more.