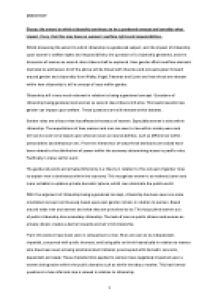 Discuss the extent of which citizenship continues to be a gendered concept and consider what impact, if any, that this may have on women's welfare rights and responsibilities.

﻿@00233619 Discuss the extent to which citizenship continues to be a gendered concept and consider what impact, if any, that this may have on women?s welfare rights and responsibilities. Whilst discussing the extent to which citizenship is a gendered subject, and the impact of citizenship upon women?s welfare rights and responsibilities, the question of is citizenship gendered, and the discussion of women as second class citizens shall be explored. How gender effects welfare elements shall also be addressed. All of the above will be linked with theories and concepts given forward around gender and citizenship from Walby, Vogel, Pateman and Lister and how these are relevant within how citizenship is still a concept of issue within gender. Citizenship still is very much relevant in relation to being a gendered concept. Questions of citizenship being gendered and women as second class citizens still arise. This leads towards how gender can impact upon welfare. These questions are still relevant within debates. Gender roles are a factor that has affected the status of women. Especially women?s roles within citizenship. The expectations of how women and men are seen to live within society were and still can be seen to be based upon what are seen as natural abilities, such as differences within personalities and behaviours etc. From this hierarchy?s of ways these attributes are valued have been related to the distribution of power within the economy determining access to pacific roles. Pacifically in status within work. The gendered public and private/dichotomy is a theory in relation to this concept of gender roles to explain men?s dominance within the economy. ...read more.

Connections between full citizenship rights and participation in paid work impacts upon the rights of women who provide informal care. ? As participants in the market, men can be seen as making public contributions, and are in a position to be levied by the state to make a contribution more directly, that entitles them to the benefits of the welfare state. But how could women be dependants of men, who?s legitimate ?work?, is held be in the private sphere be citizens of the welfare state? What could or did women contribute? The paradoxical answer is that women contributed welfare.? (Dwyer, P.:p114). It needs to be recognised that without the informal car of women within the home that men would be unable to work within the economy with the ease that they do. Welfare is supported by the unpaid private care provided by women, which leads to women being disadvantaged within their welfare rights. Males are seen to claim welfare legitimately through their contributions from tax and national insurance etc. The states ignorance to recognise informal care pushes women to be dependent upon men. Women?s dependence upon men helps them to gain from the patriarchal state. The welfare state doesn?t challenge practices that define women as dependants rather than independent citizens. Aspects of social change are of particular relevance to women?s citizenship. Female employment has risen however the world of work still remains to be gendered, this can be seen through occupational hierarchy segregation, where men are based at the top given higher jobs within the market with women below. ...read more.

Gender issues within citizenship need to be recognised within private life rather than politically for women to gain full citizenship status. Citizenship needs to look at the roles in which the family react to gender divisions within the labour market and the structure of men and women?s relationships with the welfare state and participations within public affairs. The experiences of citizenship for men and women differ. With men?s interest seen as normal and women?s interests marginalised. British citizenship is still divided by gender. It needs to be recognised that some women have gained full citizenship, but as a whole women are disadvantaged within employment and access to state benefits and within politics. Especially women within groups such as lone mothers, elderly and disabled women who are likely to live in poverty excluding them from full citizenship within society. ?Citizenship cannot be abstracted from their private life, and that woman?s current domestic and caring responsibilities limit their participation in employment and politics.? (R, Lister, 2003) Policies aimed at ending women?s second class citizenship need to look away from individualism and be based upon the shared need and responsibilities of all citizens for all to be recognised. Therefore in all citizenship is still very much a gendered concept today. Reference Birte, S (2000) Gender and citizenship: politics and agency in France, Britain and Denmark. Singapore: Green Giant Press Bryson, V., Lister, R. (1994) Women, citizenship and social policy. Bradford: University of Bradford. Dwyer, P. (2010) Understanding social citizenship: themes and perspectives for policy and practice (2nd ed). Bristol: Policy. Lister, Ruth. (2003) Citizenship: feminist perspectives (2nd ed.) Basingstoke: Palgrave Macmillan Walby, S. (1999) New agendas for women. Basingstoke: Macmillan Walby, S. (1997) Gender transformations. London: Routledge ...read more.