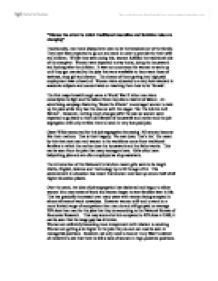 &quot;Discuss the extent to which traditional masculine and feminine roles are changing&quot;

"Discuss the extent to which traditional masculine and feminine roles are changing" Traditionally, men have always been seen to be the breadwinner of the family. They have been expected to go out and work in order to provide for their wife and children. Whilst they were doing this, women fulfilled the traditional role of the caregiver. Women were expected to stay home, doing the housework and looking after the children. It was not uncommon for women to work up until they got married but the jobs that were available to them were those of waitress, shop girl and cleaner. The chance of them getting into high paid employment was unheard of. Women were educated to a very low standard in academic subjects and concentrated on teaching them how to be 'female'. The first major breakthrough came in World War II when men were conscripted to fight and the labour force required a reserve of labour. An advertising campaign featuring 'Rosie the Riveter' encouraged women to take up the jobs while they had the chance with the slogan 'Do The Job He Left Behind'. However, nothing much changed after the war as women were expected to go back to their old lifestyle of housewife and mother and the job segregation still only entitled them to work in very low paid jobs. ...read more.

Job segregation has previously stopped men from entering professions such as hairdressing and nursing but more and more men are now starting to get into these jobs. Although men are now working in what were traditionally seen as women's jobs, for example nurses instead of doctors, these jobs have become a lot more technological than they used to be. Being a nurse is no longer about basic jobs such as emptying bedpans, it is also about using computers and technological equipment. The 1990's began a media hype about what became known as the 'New Man'. This is a term used to refer to househusbands, men who stay at home, doing the housework and looking after the children, whilst the wife goes to work. According to the Office of National Statistics, the number of househusbands has risen from 44,000 to 99,000 since 1974. However, although more men are becoming househusbands, men's position in the labour market is not changing. Approximately 94% of men aged 25-54 were in the labour force in 1995, as was the case in 1971. A survey of 902 women was carried out at The University of Memphis. The women were all Harvard University graduates with at least 1 child. Out of these women, 70% had reduced their hours of paid work because of their children, over 50% had changed jobs to accommodate childcare responsibilities and nearly 40% claimed that parenting had slowed down their career advancement. ...read more.

This theory is contradicted by Oakley and Maynard who provided research showing that women in paid employment are still contributing to housework and their working week has increased and women in full time employment are still primarily responsible for housework. Similar research by Port Talbot, Delphy and Leonard found that men do not take over domestic chores as they see it as an attack on their masculinity. Statistics show that in double income households, the average time spent on housekeeping and childcare by women has increased between 1986 and 1996 from 3.32 hours a day to 3.54 hours, whereas the time spent on these activities by men has only increased from 0.06 hours to 0.10 hours. In conclusion, I don't think that traditional roles are disappearing as such, but women are changing their priorities. As women are able to get into the labour force and into the highly paid jobs, they are able to provide economic stability for themselves and their children. Increased childcare facilities are enabling women to work and single mothers to cope. However, it seems that after their day at work, women go home and return to their traditional roles by doing the housework and looking after the children. Men's roles do not seemed to have changed much. More men are staying at home and looking after the children during the day yet it seems that this responsibility is handed over to the wife on her return from work. ...read more.