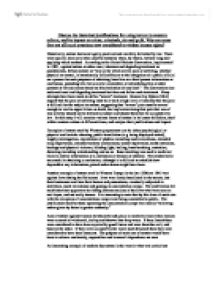 Discuss the historical justifications for using torture in western culture, and its impact on crime, criminals, sin and guilt. Why are some (but not all) such practices now considered to violate human rights?

Discuss the historical justifications for using torture in western culture, and its impact on crime, criminals, sin and guilt. Why are some (but not all) such practices now considered to violate human rights? Historically, torture has been legally practiced and carefully delimited by law. There were specific rules as to who could be tortured, when, by whom, for how long and applying which method. According to the United Nations Convention, implemented in 1987, against torture or other cruel, inhuman and degrading treatment or punishments, defines torture as "any act by which severe pain or suffering, whether physical or mental, is intentionally inflicted by or at the instigation of a public official on a person for such purposes of obtaining from him or a third person information or confession, punishing him for an act he committed, or intimidating him or other persons or for any reason based on discrimination of any kind." The Convention also outlawed cruel and degrading treatment but does not define such treatment. Many attempts have been made to define "severe" treatment. General Jay Bybee (USA) argued that the pain or suffering must be of such a high level of intensity that the pain is difficult for the subject to endure, suggesting that "severe" pain must be severe enough to lead to organ failure or death, the implication being that pain that was of less severity should not be defined as torture and should therefore be acceptable by law. In this essay I will examine various forms of torture in its looser definition, used within western culture at different times, and analyse their justifications and impact. ...read more.

There is therefore a utilitarian argument in favour of using torture to gather information which will be used to save the lives of innocent people and that the use of torture against one individual is therefore a price to be paid. Harvard's Alan Denslouting in 1995 pointed out that after months of torture, one Abdul Hikin Murat revealed various terrorist plans which were then prevented. The evil of torture is seen as sometimes being outweighed by good outcomes. One frequently used justification for torture is that the means justifies the end - it is sometimes necessary to use torture to extract information considered vital to save many lives - for example being at risk of acts of terrorism. However, LeBossiere points out that information extracted through torture is so unreliable, as people will often confess or divulge anything at all, true or fabricated, to bring the torture to an end. Therefore it follows that if the information extracted cannot be relied on, it is worthless and therefore there is no justification whatsoever in torture. The Gestapo's use of torture against the French resistance in the 1940s and the French use of torture against Algerian resistance of the 1950s were both considered largely ineffectual. Diederik Lohman, Human Rights Activist, found that torture typically led to information that is not accurate. Many people will say almost anything to bring an end to their terrible suffering, threats and mistreatment. So torture cannot be seen as a reliable way of acquiring accurate intelligence. ...read more.

Information and memory simply fall away, and the past is erased without censorship or propaganda becoming necessary. Western democratic societies still encourage rewriting of history, often on the grounds of diplomacy or promoting western interests - former terrorists who win power suddenly become worthy of negotiations with western states who previously refused to deal with them, with no or little attempt at a principled justification. Some western attempts at justification have included statements that there must always be another point of view. Evidence of massacres and other atrocities in such cases are often downgraded to being considered as merely a series of allegations or claims. To conclude, no state or individual particularly wishes to torture suspects but nearly all state they need to extract information to protect citizens. This justification is used in current Western societies facing terrorist attacks on civilian populations and also on troops in Iraq and Afghanistan. Few would attempt to justify their actions as being necessary to protect the regime in power, but this is very often what drives torture. I believe there is an extremely fine line between protecting civilian populations from terrorist attack or military forces from insurgent attacks, and protecting the government in question. All forms of torture are considered by most educated people morally repugnant in today's western societies, owing to a steady increase in awareness of human rights issues as led by the United Nations. It is concerning to see the United States attempting to define torture which is acceptable to them. Today, all states have the power through the United Nations to produce a new code of justice based on recognizing human dignity and the equal and inalienable rights of every individual. ...read more.