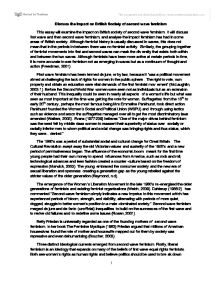 Discuss the impact on British Society of second wave feminism

Discuss the impact on British Society of second wave feminism This essay will examine the impact on British society of second wave feminism. It will discuss first wave and then second wave feminism, and analyse the impact feminism has had in some areas of British society. Although feminist history is usually discussed in waves, this does not mean that in the periods in between there was no feminist activity. Similarly, the grouping together of feminist movements into first and second waves can mask the diversity that exists both within and between the two waves. Although feminists have been more active at certain periods in time, it is more accurate to see feminism not as emerging in waves but as a continuum of thought and action (Freedman, 2001). First wave feminism has been termed de jure, or by law, because it 'was a political movement aimed at challenging the lack of rights for women in the public sphere. The right to vote, own property and obtain an education were vital demands of the first feminist movement' (McLaughlin, 2003:1). Before the Second World War women were seen not as individuals but as an extension of their husband. This inequality could be seen in nearly all aspects of a woman's life but what was seen as most important at the time was getting the vote for women. ...read more.

The Labour government gave in to feminist pressure and introduced the 1970 Equal Pay Act. This stated that a female employee was entitled to equal pay if the work she did was similar or the same to that of her male counterparts. The impact of this legislation, together with other important factors such as the opening up of higher paid work to women, has been to narrow the differential between the hourly earnings of men and women. In 1986, the hourly earnings of women working full-time in Great Britain were 74 per cent of those of men, whereas in 2000 they had risen to 82 per cent. The differential between men and women working part-time is smaller, for example women's hourly earnings were 88 per cent of those of men in 2000 (ONS, 2009). Another feminist demand was that of equal education and job opportunities. In 1975 the Sex Discrimination Act was introduced which made it illegal to deny an individual access to education on the grounds of their gender. It also made it illegal for schools to stop females studying certain subjects or for universities to operate quota systems which restrict the proportion of female students to subjects such as medicine (Dale and Foster, 1986). In 1975 35% of undergraduate students were female, this increased to 48% by 1995; traditional gendered subjects still exist however as how only one sixth of students studying home economics are male (Abercrombie and Warde, 2002). ...read more.