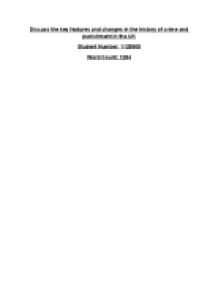 ﻿Discuss the key features and changes in the history of crime and punishment in the UK Student Number: 1125908 Word Count: 1284 ________________ Crime and punishment has changed constantly throughout our history. From the earliest records we can piece together what types of crimes there were, and how they were punished in the United Kingdom. There have also been many changes which have helped mould our current legal system. From very early on in the United Kingdom, the law involved the protection of property and individuals. We can see from early court records that the most common type of crime in the middle ages was that of theft. It accounted for nearly three quarters of all crimes, with murder coming next, receiving stolen goods, and then all other crimes including rape, arson, treason etc. only makes up around 2% of crimes. The punishments that were handed out for these crimes varied and were kept constant up until around the 19th century. The death penalty was often used as it was seen as the easiest option, and could be used as a deterrent for others. Prison, or ?gaol? as it was known as, was not usually seen as an option as it was too expensive. ...read more.

Witchcraft prosecutions were mainly held in church courts as it was seen as a religious crime. In the Eighteenth Century the power of the Monarchy and the Church were replaced by the Law and the Government. This gave a change in the attitude towards imprisonment as a punishment. The death penalty was being used less and less as there was a growing reluctance towards it. There were lock ups, houses of corrections and prisons, however they were not used properly, and there were no real custodial sentences. There were over 90 prisons built in the United Kingdom between 1840 and 1877, however there was still much public debate as to what they were to be used for and how much they were going to cost to run effectively. Within these prisons there were two systems used. The first was called the ?Separate System?. Criminals were forced to be in solitary confinement for most of the day, this was done as it was thought that the criminals would have to spend most of their day thinking about what they had done, and it would make them repent. The other system was known as the ?Silent System?. This system made the criminals do hard boring work in large workshops, and although they would be with other prisoners, they were made to work in complete silence. ...read more.

In 1854 the Young Offenders Act was set up. This meant that special reform schools were built, this meant that juveniles were not sent to prison, but were sent to these schools to repent and change their ways. Women were also being punished differently. Instead of being burned or hung like they were in earlier times, in 1853 the first women only prison was opened ? Brixton. There have been many key changes in the history of crime and punishment in the United Kingdom. The most recognisable difference is the introduction of the prison system. Before the prisons were a major part of our punishment regime, crime was dealt with in an overly harsh manner. With the introduction of our prison system we have seen a major change in the way we deal with and perceive crime. We can also see that our perception of crime has changed throughout history. The core offences from crime however have stayed the same throughout the history of crime and punishment in the United Kingdom. These offences are: murder, rape and burglary. These were seen as wrong in our early history, and are still seen on the same way today. So, although the way we deal with crime has changed, the way we see crime has not. ________________ Newburn, T., 2009. Key Readings in Criminology. Devon: Willan Publishing http://www.oup.com/uk/orc/bin/9780199215546/01student/glossary/online/#S [online. Accessed on 29/10/11] http://en.wikipedia.org/wiki/Thief-taker [online. Accessed on 3/11/11] ...read more.