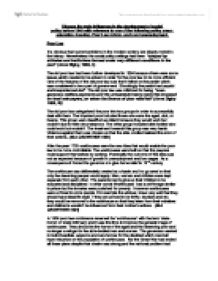 Discuss the main influences in the development of social policy before 1945 with reference to Poor Law reform.

Discuss the main influences in the development of social policy before 1945 with reference to one of the following policy areas: education, housing, Poor Law reform, work and unemployment. Poor Law It is obvious that current problems in the modern society are deeply rooted in the history. Nevertheless the social policy settings had been "shaped by attitudes and institutions formed under very different conditions in the past" (Anne Digby, 1989, 5) The old poor law had been further developed in 1834 because there were some issues which needed to be solved in order for the poor law to be more efficient. One of the features of the old poor law was that it relied on the parish which was considered to be a part of government. Shockingly the parish had unpaid and inexperienced staff. The old poor law was criticized for being "over-generous welfare payments and the unbearably heavy costs this imposed on local rate-payers, on whom the finance of poor relief fell" (Anne Digby 1989, 30) The old poor law categorised the poor into two groups in order to successfully deal with them. The impotent poor included those who were the aged, sick, or insane. This group were classified as reliant because they would work but couldn't due to their circumstances. ...read more.

This attitude brought other improvident behaviours to the workforce such as lack of respect to the employer and no incentive to work hard. For the reason that parish were contributing to the wage, the employers kept wages as low as possible. The majority of the public wanted to take advantage of the poor law. (M.A CROWTHER 1981) Before 1834, the cost of looking after the poor was increasing year by year. The cost was billed to the middle and upper classes of each town. It was added on to their local taxes. It eventually brought arguments amongst the payers for the reason that paupers were very lazy and unwilling to work despite their physical fitness. Besides that further evidence shows that after the French war southern counties had to pay more poor relief than any other region across the country. This was because of the depression and the nature of the labour market. (M.A CROWTHER 1981) The current average life expectancy of a male manual worker is much higher than it used to be in 19th century which meant that there used to be high proportion of widows with children which were dependent on poor relief despite that they were employed it was still not enough to meet their essential needs. ...read more.

(Marvin Rintala 2003) Conclusion There have been so many actions to tackle the poverty but the commissioners did not realise the poor law itself was the cause of poverty. As it was stated on the first paragraph of this essay that social policy is "shaped by attitudes and institutions formed under very different conditions in the past". Therefore it can be said that in the past the Political, Economical, Social and Technological factors were the main influential contributing factors that forced the Liberal government to introduce reforms. There have been many studies that enlightened ideas such as Seebohm Rowntree's which found out that in 1901 nearly 1/3 of the population did not have the minimum to live on some time during their life time. The public was vulnerable to decisions that had been implemented by the government. When Britain went to 'The Boer War' it was found that shockingly 2/3 of the men that applied to the army were unfit. The poor law did affect the citizens of UK which had implications in many areas. One of the reasons that Liberal government had started to concentrate more on reform was that the Labour party was growing stronger by attracting working class voters of its determination for welfare reform. ...read more.