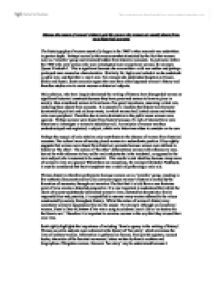 Discuss the nature of women's history and the reason why women are mostly absent from most historical accounts.

Discuss the nature of women's history and the reason why women are mostly absent from most historical accounts The historiography of women essentially began in the 1960's when research was undertaken in greater depth. Perhaps ironically this was somewhat stimulated by the fact that women were an 'invisible' group and remained hidden from historical accounts. In particular, before the 1960's the only women who were investigated were exceptional women, for example Queen Elizabeth I. This is significant because she was neither a wife nor mother and perhaps portrayed more masculine characteristics. Similarly Dr. Inglis was looked at as she undertook a public role, and therefore a man's role. For example she established hospitals in France, Serbia and Russia. Scott correctly argues that men have often bypassed women's history and therefore studies aim to create women as historical subjects. Male scholars, who have largely dominated the writing of history, have disregarded women as significant historical constructs because they have perceived women to have no place in society. Men considered women to have been of no great importance, assuming a silent role, rendering them absent from accounts. It is essential to illustrate that history was formerly dominated by political and military events, in which women had limited access and whose roles were peripheral. Therefore due to male domination in the public arena women were ignored. Perhaps women were absent from history because of a lack of interest from male historians to investigate a woman's subsidiary role. ...read more.

The power that women held in this enterprise is constructed in terms of their economic control of the family's finances. For example whilst the husband is head of the household, the wife has a degree of control since she is responsible for procuring food for the family. This was not easily obtained, for example not only through the marriage bar, imposed prior to World War One, which restricted women working, but also middle class women could not hold their own property until 1870 and thus had no financial support. Similarly banks would not lend women money, as they were not recognised once married. This resulted in 'social closure', and working opportunities were restricted. The marriage bar highly effected working class women and they would have had to find other mechanisms to survive. For example they often pawned household items or relied upon social networks, for example in Liverpool, in times of hardship. However this did enable the woman to exercise a degree of financial control over a large percentage of the family's budget. The husband may exercise physical and legal power, for example married women did not achieve the franchise until 1918, but the wife exercises financial power. Thus the family may be seen of immense importance as it provided the woman with both financial control and avenues of political comment. This indicates that the bedrock of feminist historical examination is the use of the concept of patriarchy to analyse material. ...read more.

This action was essential because it provided the impetus for the subsequent suffrage action. In fact the theory of separate spheres is too constricting and as Shoemaker argues whilst their position undeniably narrowed they were involved in the public sphere. In fact what is regarded as private by some, for example middle class voluntary and charity work outside the home, is understood by others a public activity. This theory is highlighted by the debate between the optimists and pessimists. Sociologists of the 1960's and 1970's and many recent historians have been optimistic in the situation for women prior to the industrial revolution, for example Shorter. They believe that the industrial revolution supported the marital family and an increase in equality between men and women. This resulted from educational opportunities, which encouraged and aided women to enter the labour market, increasing their visibility and freedom. However Marxists and Feminists, for example Clark disagree portraying that as a result o capitalism which created cheap labour, women's position in the home was highlighted. It is possible that the two schools will never agree upon a conclusion of the position of women. It remains questionable whether the past could and will ever be rectified. Women's history remains premature. Roger's highlights women's historiography remains ambiguous because the status of women and their domination in the private arena conceals as much as it enlightens. In Thomas suggests that until more precise categories and clearer questions can be formulated the research will remain incomplete. To date women's history is a social history, which seeks to recover the position of invisible women portraying them both as individuals and as part of a group. ...read more.